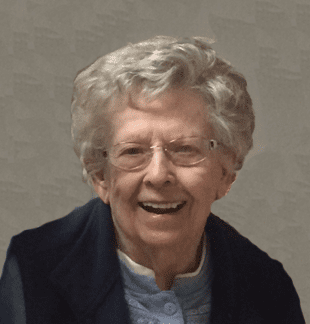 She was born April 22, 1926, in Moundsville, WV., the daughter of the late Andrew and Myrtle Wood Clark.

In addition to her parents, she was also preceded in death by her husband, James Benedict Gardill in 1978, two brothers, John and Andrew Clark and two sisters, Mary Clark Storch and Nancy Clark Messina, son-in-law, Stephen Edge.

Family and friends will be received on Wednesday, May 24, 2017, from 1-4 pm and 6-8 pm at Altmeyer Funeral Home, Lutes & Kirby-Vance Chapel, 118 Grant Street, Moundsville. Rosary Devotions at 8 pm. Mass of Christian Burial will be celebrated on Thursday, May 25, 2017, at 10 am at St Francis Catholic Church, Moundsville with Fr. That Son Ngoc Nguyen as celebrant. Interment will be private at St. John Cemetery, New Baltimore, PA.,

The family would like to express their appreciation for the wonderful care given to Agnes at Good Shepherd.

Memorial contributions may be made to St. Francis Xavier Catholic Church in Agnes memory.

Online condolences may be made to the family at www.altmeyerfuneralhomes.com

Our thoughts and prayers are with you and the family during this difficult time.

So sorry I did not get there today. Agnes was like a second mother to me. Nothing but fond memories of her. Love and kind thoughts for her family and friends.

Our prayers for Christ’s peace and comfort are with you and your family Pat. So very sorry for this profound loss.

Aunt Aggie what a character you were! We love you and will miss your quick satirical wit. May your children and grandchildren have comfort in knowing how much you were loved.

Liddy, I am so sorry to hear of the loss of your mother. May God provide peace and comfort to you and your family. Sending prayers.

Liddy, I am so sorry for your loss. Prayers for you and your family.

Our deepest sympathies and prayers are with your family at this difficult time. May God give you comfort in your time of grief.

Wishing Agnes a swift journey to Heaven to be in the arms of the Angels. Sending our prayers for Peace and Solice to every GARDILL who will forever hold her in your hearts.

Deepest sympathy in the loss of your mother. May her memory be eternal. The Landers family

Please accept our deepest sympathy. I will miss the jingling of her keys, the visits and conversations we had in the office and the political telephone conversations she had with my mother.