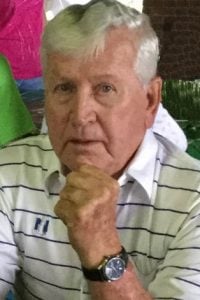 He was born August 30, 1927, a son of the late Edward and Julia (Clark) Vogler. Albert was a US Navy WWII Veteran, an avid golfer, movie buff and dog lover.

In addition to his parents, he is preceded in death by three brothers, Edward, Harry and James Vogler and one sister, Mary Ellen Vogler.

Memorial contributions may be made to the Ohio County Animal Shelter by clicking here.

Dear family, so sorry to hear of Al’s passing, AL got me job at the closure plant 31 years to day of his viewing, I am sorry I did not know or I would have visited funeral home, You guys will be in my Prayers

Holly Brian, Dwaine and Dana so sorry for your loss. Al was a good man. May he rest in peace

May he rest in peace

So sorry to hear of Al’s passing. I always like him. He always had something pleasant to say. He was so good to his mother, always took her to the store and was there if she ever needed anything. (His mother used to say “he takes me to get groceries, but I never get to look at anything because he’s always in a hurry.” I know how she appreciated all he did for her. Will miss his smile. May he rip.

So sorry Janet and all who loved him. I always liked Al. He always had a winning personality. He was so good to his mother. Always taking her to the store, and always there for her. Will miss him.

Im so sorry to hear about your dad. He was such a special person, always smiling and doing things for people. You are in my prayers

May your memories of Albert Otto Volger, give you peace, comfort and strength…