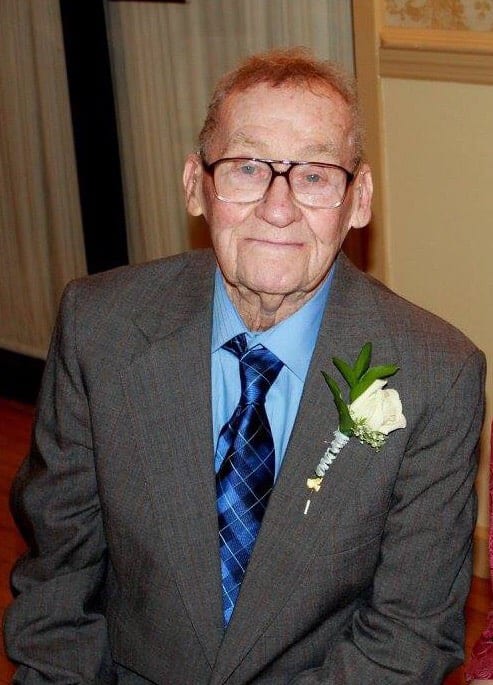 Alvin F. Weidman, Sr., 91, of Warwood,was accepted into heaven on Sunday, April 9, 2017 at his home, surrounded by family and prayers.
He was born July 12, 1925 in Wheeling, a son of the late Frank and Mary Veronica Mullen Weidman.
Alvin was a devout Catholic and was a member of Corpus Christi Catholic Church in Warwood.
He was a Navy veteran during World War II and retired from the U.S.Postal Service after 36 years as a mail carrier. He volunteered his time with a variety of causes, including Catholic Charities, but he could always be seen practicing his golf game- no matter the weather. He was a well known figure as the “man on the corner” on National Road, advocating for pro-life.
In addition to his parents, Alvin was preceded in death by a brother, Phillips Weidman, and 3 sisters, Mary Margaret Altman, Patricia Miller and Janet Weidman.
Alvin is survived by his loving wife of 65 years, Josephine Elias Weidman, and their 13 children; Mary (Gary) Clegg of Wheeling, Anne (Kevin) Goist of Columbiana, OH, Therese Weidman of Wheeling, Judy Palmer of Cape Coral, FL, Margaret (Michael) Zebrine of Wake Forest, NC, Christine (Michael) Robinson of Columbus, OH, Eleanor (Michael) Forbes of North Canton, OH, Lisa Forsyth of Pittsburgh, PA, Joseph (Vicki) Weidman of Fort Lauderdale, FL, Alvin (Mary Kay) Weidman, Jr., of Morgantown, WV, Patrick (Nancy) Weidman of Morgantown, WV, Paul (Dawn) Weidman of St. Clairsville, OH, Luke (Connie) Weidman of Charlotte, NC, 40 grandchildren and 14 great grandchildren. He will be lovingly missed by family and friends
Family and friends will be received on Tuesday, April 11, 2017 from 2:00pm until 8:00pm at the Altmeyer Funeral Home, 1400 Eoff St., Wheeling where a special presentation of the rosary will be conducted at 7:30pm.
Mass of Christian Burial will be celebrated on Wednesday, April 12, 2017 at 10:00am at the Cathedral of St. Joseph, 1300 Eoff St., Wheeling, with Msgr. Kevin Quirk as celebrant.
Entombment will follow in Mt. Calvary Mausoleum, with full military honors with the Moundsville Honor Guard.
Memorial contributions made be made to Catholic Charities, 2000 Main St., Wheeling, WV 26003 or online at www.TMCFunding.com (Click Here).
Online condolences may be extended to the family at www.altmeyerfuneralhomes.com.

Mrs. Weidman & children, Can’t tell you in so many words, how he will be missed. I considered them to be my 2nd set of parents. They considered me their “blond daughter”, hope you didn’t mind that. Always invited to Therese’s house for the major days in the year. Couldn’t write before this. But now I have the great privilege of being with Mom, three days a week & I think we’re both enjoying it. Please know that I love you dearly & both of my Dad’s now know each other up in heaven! Love, hugs & prayers to you all, Buzzy

To Mrs. Weidman and Family,

So sorry to learn about Mr. Weidman.

I am very sorry for your family’s loss; Mr. Weidman added a lot to our community; I always honked to support him on the corner on my way to work; God gave him great courage and conviction. Of course, I knew him as our Warwood postman and the dad of all the little Weidman friends at Corpus Christi. Wonderful memories and glad he was my mail carrier! He always whistled and smiled at everybody!

Paul, Dawn and Family, I’m so sorry for your loss. Al was a beautiful soul; I’m sure the Lord smiled as he brought him home. You and all your family will be in my heart and prayers. Peace, Love and All Things Good <3

I work for Dr Geary and just came home from vacation to read Heather Zieglers column today. I was saddened to learn of Mr Weidman’s passing. What a kind , sweet soul. God bless him and your family.

I just today was made aware of the passing of Mr. Weidman with the wonderful article in the Wheeling paper. I had been out of town the past few days. Although I only had the privilege of his company on select occasions ( running in to him at the golf course in the late afternoon) it was always a distinct pleasure. He was a man who exuded a quiet sense of calm and contentment. I am sure that it was partly to do with the wonderful family that he and Mrs Weidman raised. He was a fine gentleman and a true friend of Christ. May he rest in peace with the souls of the faithfully departed!
God Bless!

Al, Mary Kay, and family,
We are sorry to learn of your dad’s passing. May your memories of stories, laughter, and love shared bring you comfort during the days ahead.

I use to live beside mr weidman years ago on 23ed and wood st. I will pray for your family.

Chris, Eleanor and family: so sorry to hear of your father’s passing, but what a beautiful Easter season it will be for him. May God bless you all in this time of sadness. My prayers are with you at this time. Kashelle Evans