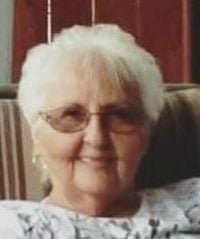 Antoinette was born October 30, 1940 in Wheeling, the daughter of the late Anthony and Anna (Kenderes) Magistro. She was a retired employee of the Ohio Valley Asthma & Allergy Institute, Wheeling, and a member of St. Francis Xavier Catholic Church, Moundsville.

In addition to her parents, she was preceded in death by her husband, Charles Anthony Kobasko; a daughter, Anita L. Briggs; a son-in-law, David Brian Cook; and a brother, Anthony Magistro.

Friends will be received from 2-8 pm, Sunday, at Altmeyer Funeral Home, Lutes and Kirby-Vance Chapel, 118 Grant Avenue, Moundsville, where a rosary service will be held at 4 pm. Mass of Christian Burial will be celebrated at 10 am, Monday, November 9, 2015, at St. Francis Xavier Catholic Church, Moundsville, with the Rev. Raju Antony as celebrant. Entombment will follow in Parkview Memorial Gardens Mausoleum, Wheeling.

So sorry for your loss Shelley. You are in my thoughts and prayers.

May you find peace and love in the memories you cherish. I will always remember her kindness towards me. She will be missed but not forgotten . She is now with Charlie . Rest in pease.

Brooklyn told me about the loss of Syd’s Grandmother, and I’m so sorry. You are all in our thoughts and prayers.

My thoughts are with you all at this time in your life. My heart is heavy I am at a loss for words She was a beautiful woman and so very kind hearted. I love you all

Prayers and condolences to the family in particular to Shelly and John. May the Lord comfort you in your time of sorrow.

Charlene, Tonya, & family,
I am so sorry for the loss of your Mom. I adored her & have very fond memories of her. She always knew how to make me laugh. RIP “Smokedog”. Prayers for your family for strength & peace

To the Kobasko family,
Very sorry about Mrs. Kobasko. My thoughts and sympathy go out to all of her friends and family. I’m sure she enjoyed her life and all of her kids and grandchildren during her time here.

Love & prayers to Brandy & her family, during this difficult time.