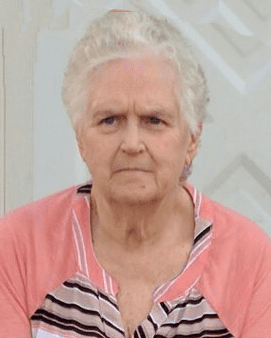 SLEETH, Barbara Ellen Green, “Nunny”, 76, of Wheeling, passed away on Friday March 31, 2017. She was surrounded by her loving family and died peacefully at OVMC.
She was born January 26, 1941, in Wheeling , the daughter of the late Thomas and Mildred Hess Green.
Barbara worked as a waitress at Kregge’s Five and Ten in her younger years and was a clerk at Miklas Meat Market in her later years , was a Christian and a Protestant by faith.
In addition to her parents, she was also preceded in death her husband, Larry E. Sleeth in 2012, three brothers Edward, Donald and Kenny Green and a sister Florence France.
Surviving are her seven children, Sharon Sleeth of Wheeling, Randall Sleeth (Linda) of Wheeling, Karen Sleeth Doty (Steven) of Moundsville, Roger Sleeth of Barnesville,, Rodney Sleeth of Cameron, Tammy Sleeth McCave of Wheeling, Pamela Sleeth and her Fiancé Wallace Lambert of Savanah Georgia, a brother, David Green (Debbie) of Huntington, WV., eleven grandchildren, Jessica Bryan (Chie), Randy Sleeth, Abbey, Eric and Ryan McCave , Devon Emily, Madison and Lily Sleeth, Emily and Sarah Doty, three great grandchildren, Anthony and Avery Bryan and Kenzlee Meely, also special family friends Logan Doyle, Kyleigh Doyle, Lisa Cover, Erik Cover, Seth Cover and Braydon Cover.
Also left behind is her beloved Yorkie Lucey and a thank you to the staff of OVMC and Valley Hospice for their wonderful care during a difficult time.
Family and friends will be received on Sunday, April 2, 2017 from 1-3 pm and 6-8 pm at Altmeyer Funeral Home, 1400 Eoff Street, Wheeling where services will be held on Monday, April 3, 2017 at 5:00 pm with Pastor Gino Vercellotti officiating. Interment will be held at the convenience of the family.
Online condolences may be made to the family at www.altmeyerfuneralhomes.com.

To the Sleeth Family my heart goes out to each of you. Barbara was an amazing person with such a big heart. I remember growing up and staying at the “fun house “.Being the youngest left at home it brougt great joy and happiness to be surrounded by the large SLeeth Family. Pam would escape from the kaos to come to the quietness of my house. We had the best of both worlds. May GOd’s blessings comfort each of you through this difficult time.

Sleeth Family, I am so sorry for your loss. My thoughts and prayers are with you.

My heart goes out for all of the Sleeth Clan. Your mom was a great person. I’ll never forget getting popsicles at the playground. She will be missed. Hopefully, our parents now are reminiscing on good times together.
My sincerest condolences,
Marcy Bowman Huntsman

Sharon and Family–I am so sorry to hear of Barbara’s death. May you and your family be blessed with peace of mind and heart during this tough time.

Sharon and Family– I am so sorry to hear of Barbara’s death. May God bless you as you grieve her presence in your lives.

My the Good Lord wrap you in his loving embrace and bring you peace and comfort in your time of loss.

She will always have a special place only she can hold in my heart <3 God Bless all of you and our prayer for comfort is with you .

My sincere and deepest condolences to the family and friends of Mrs. Sleeth. Denny Albaugh

My thoughts and prayers are with you and your family at this time of sorrow.

I remember as a young girl we were neighbors with Barbara’s aunt and she would come by with a stroller and a couple of little ones to visit. Sincere condolences to the family . RIP Barbara