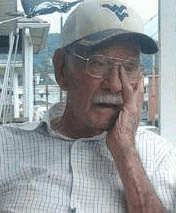 Fish, Carl E., 99, of Moundsville, died Friday, March 17, 2017, at home.
He was born April 16, 1917, in Jackson County, WV., the son of the late William and Florence Otte Fish.
Carl was owner/operator of Spears and Fish Plumbing, a member of the Moundsville Baptist Church, a US Army veteran of WWII, a member of the American Legion Post #3, VFW #437, Moose #1087, Elks #282, and Eagles #499.
In addition to his parents, he was also preceded in death by his wife, Gladys M. Roberts Fish; a sister, Blanche Chambers; two half-brothers, Homer and Herman Harlan; a half sister, Helen Vuiller.
Surviving is a sister-in-law whom he lived with, Ruth Hooker; a sister-in-law, Hilda Kittle of Moundsville; a nephew, Bill Vuiller (Wilma) of Weirton; several nieces and nephews.
Family and friends will be received on Sunday, March 19, 2017, from noon to 3 pm and 6-8 pm at Altmeyer Funeral Home, Lutes and Kirby-Vance Chapels, 118 Grant Avenue, Moundsville where services will be held on Monday, March 20, 2017, at 1:00 pm with Pastor Ralph Green officiating. Interment to follow in Halcyon Hills Memorial Gardens, Sherrard, WV. Moundsville Honor Guard will conduct graveside military services at the cemetery.
Memorial contributions may be made to Helping Heroes, 256 Jefferson Ave., Moundsville, WV., 26041 or via TM Funding by clicking HERE.
Online condolences may be made to the family at www.altmeyerfuneralhomes.com.

May your memories of Carl E. Fish, give you peace, comfort and strength…

My dear friend, you will be missed!
Sincere Condolences at this sad time for his family and friends.