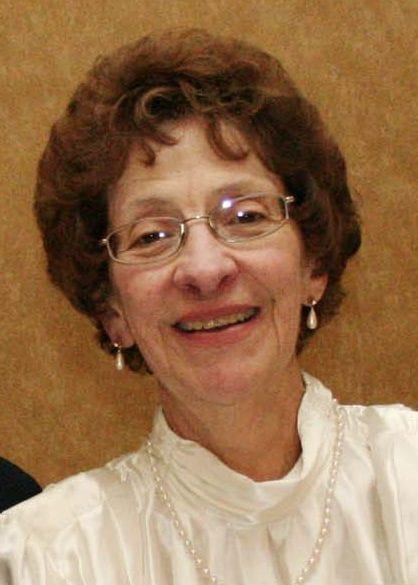 KLUG, Carol Ann, 73, of Wheeling, W.Va., died Thursday, July 9, 2015 in Wheeling Hospital.
She was born December 26, 1941, in Wheeling, a daughter of the late Anthony “A.J.” and Helen (Thomas) Sonnefeld. She was a member of Our Lady of Peace Catholic Church in Wheeling.
In addition to her parents, she was preceded in death by her son, Brian Klug, one brother, Thomas Sonnefeld, and one sister, Mary Jane Sonnefeld.
She is survived by her loving husband, Donald Klug; one daughter, Julie (Rob) Wickham of Wheeling; two sons, Bruce (Jennifer) Klug of Fleetwood, Pa. and Stephen (Raquel) Klug of Houston, Texas; four grandchildren, Chloe Wickham, Sarah Wickham, Sierra Klug, and Logan Klug; and several nieces and nephews.
Friends will be received on Sunday, July 12, 2015 from 4-8 pm at the Altmeyer Funeral Home, Elm Grove Chapel, 154 Kruger Street, Wheeling, where a vigil service will be held at 7 pm. Mass of Christian Burial will be celebrated on Monday, July 13, 2015 at 10 am at Our Lady of Peace Catholic Church with Rev. Doug Ondeck as celebrant. Interment will follow in Mount Calvary Cemetery, Wheeling.
Memorial donations can be made to the Gifts of Cheer Non-profit Organization, P.O. Box 462 Fleetwood, Pa. 19522 or to www.giftsofcheer.org <http://www.giftsofcheer.org>
Online condolences may be expressed to the family at www.altmeyer.com <http://www.altmeyer.com>

Julie, I was so very sorry to hear that your mother passed away and I am sorry that I was unable to attend her funeral. Please know that my thoughts and prayers are with you and your whole family! May God comfort you all in your sorrow!

we will miss aunt carol so much .

Sympathy to all members of Carol’s family. She was a good friend and neighbor. God bless you all.

Julie, So very sorry to read of your Mother’s passing. Thinking of you with sincerest sympathy. Cherrel Nash

Julie, So very sorry to read of your Mother’s passing. Thinking of you with sincerest sympathy. Cherrel Nash

We were so sorry to hear about Carol’s passing. Know that you all are in our thoughts and prayers. Take care. Love, Greg & Pam

I was so sorry to hear about Carol. She was my friend and will be sadly missed. She loved her family dearly and talked about you all the time through the years. I think she is happy to be with Bryan again, she missed him so (he was my buddy too). My heart goes out to you all, and I hope you find peace in each other.

Candy Hartley and All of us at Mane Attractions.

I read today in the Wheeling paper that your dearest mother has passed away. Please know that you and your family are in my thoughts and prayers at this time. May God’s peace be with all of you.

Uncle Don, Julie, Bruce and Stephen. So sorry to hear about Aunt Carol’s passing. Wish we could be there but know you are in our thoughts and prayers. God bless her and keep her close and may you all find peace. Hugs and kisses. Love Paula, Steve, Rita and Sebastian.

My sincere and deepest condolences to the entire family of Carol. Denny Albaugh