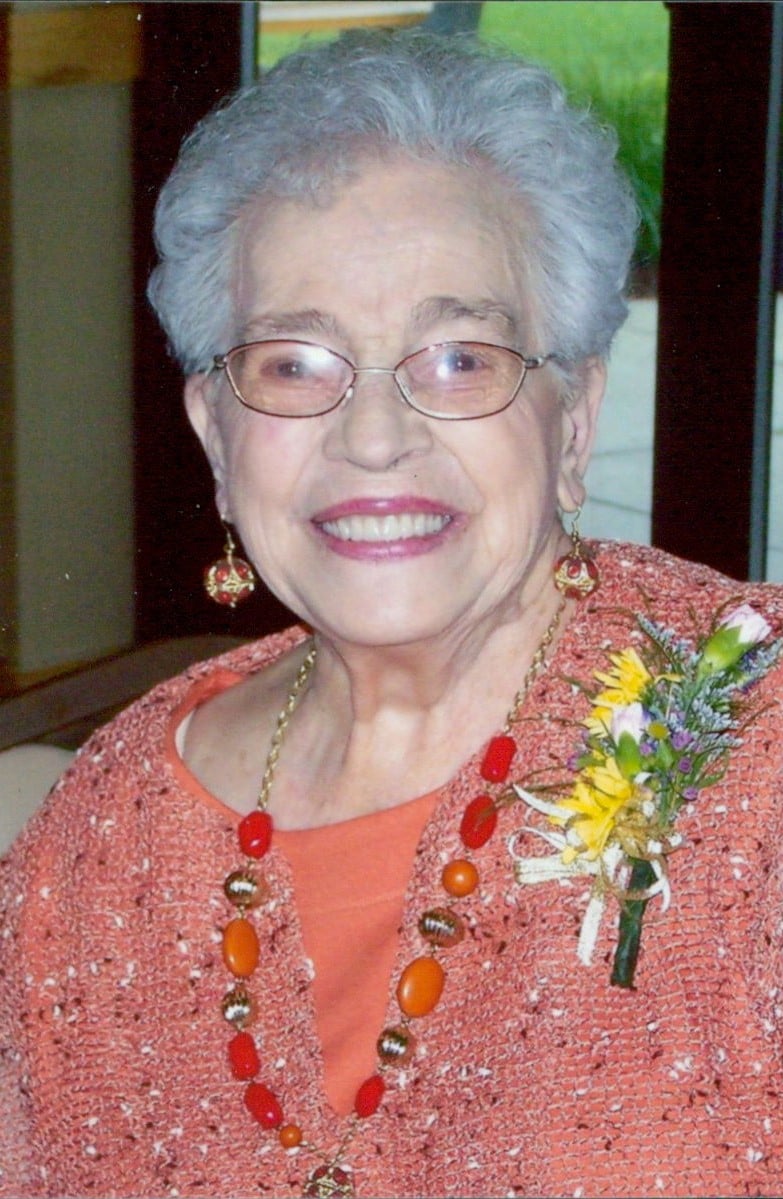 Catharine “Cathie” Lee (Bogers) Blake, 93, of Moundsville, beloved Mother, Grandmother and Great-Grandmother, went to be with the lord on Monday, May 16, 2022.
Cathie was born in Wheeling on March 19, 1929 to Wilmer E. and Minnie M. (Rudge) Bogers. Along with her parents, she was preceded in death by her loving husband of 46 years, Arlow Eldon Blake; infant brother, Wilmer E Bogers II; sister, Wilma (Leasure) Bertram and her brother and sister-in-law, William “Shannon” and Margaret Blake.
She is survived by her son, E. Arlow Blake of Moundsville, daughter, Ann (Jerry) Shook of Glen Dale, two granddaughters , Jennifer Shook of Zanesville and Josie (Keith) Shreve of Moundsville and three great-grandchildren, Blake “Alex”, Jaden and Maddie Dilbeck.
She has many nieces and nephews as her sister had eight children and Shannon had two sons.
Cathie was a member of McMechen First Christian Church where she served as Liturgist and Deaconess for many years.
She achieved Deaconess Emeritus status in 2014. For many years Cathie took it upon herself to send Get Well and Thinking of You cards to the sick and shut-ins of the church and to all members on birthdays, anniversaries and holidays. She also added to the church service over the years by singing specials with her daughter and granddaughters, usually “In the Garden” as it was her favorite hymn.
Cathie was a blessing for all who knew her and was known for her wonderful smile. She was a seamstress for all her adult life and continued to do alterations for not just her family but for friends at Reynolds Memorial Hospital, doctor’s offices, church, beauty shop and her daughter’s friends well into her 80’s. There wasn’t nothing that she couldn’t do with a needle and thread. Cathie’s loving heart was well documented as she was a published writer having her poems published in “Hearts on Fire: A Treasury of Poems on Love” in 1987 and “Our World’s Favorite Gold and Silver Poems” in 1991. Cathie was also a teacher’s Aide for children with special needs in Marshall County for several years in the 70″s.
Following her husband’s death in 1996, Cathie volunteered at Reynolds Memorial Hospital on the 5th floor, in the gift shop and hospital library. She lovingly volunteered as a way to “Pay it forward” for the loving care Eldon received at the end of his days by the wonderful hospital staff.
Friends Will be received at Altmeyer Funeral Home, Lutes & Kirby Vance Chapels, 118 Grant Avenue, Moundsville. on Wednesday, May 18, 2022 from 6-8pm and again on Thursday, May 19 2022 from 11am until time of services at12:30 with Rev. Rodney Hubbs officiating.
Memorial Contributions may be made to Special Olympics of West Virginia, 3055 Mt.Vernon Road, Hurricane, WV
25526.
Online condolences may be made to the family at www.altmeyerfuneralhomes.com.

I have a lot of wonderful memories of Cathie. We shared a birthday. She was one of my Mom’s dearest friends and I can remember her from when I was just a little girl. I always loved her laugh and her pretty smile. She will be missed. Love to all the family.

Prayers to Cathie’s family. I knew Cathie from the beauty shop. She was a beautiful lady and always had a smile on her face. She will be greatly missed. – Kay Reilley

Many memories tell us all that “Aunt Cathie,” will always be in our hearts. As sister to my mother, she always showed us love and caring. It didn’t take you long to know her, she always spoke her mind, but never hurt a flea. When we would visit her, she always had a radiant smile to welcome us. She always had “goodies for the kiddies.” She was always the one that sent us our first Christmas card. She loved her husband and children, and you could always count on a good memory even if was just a story about her loved ones. She was good hearted, and she was always nice to my wife and kids; and will be sadly missed by all that knew her, Love and Prayers and may God comfort you all with memories of, “Aunt Cathy.”

Prayers for family and friends on the loss of a very special person. She was loss to all that knew her and will never be forgotten by all that loved her. May she rest in peace.

Ann,
Sharon and I send our deepest sympathies. When you lose your mother you lose one of the anchors in your life and a tie to your past. What you are left with are the memories that will bring you comfort and the knowledge that your mother lived a full life. God bless.

Aunt Catherine was my husband’s( Tom Leasure)Aunt. Tom and I always looked forward to her Christmas cards every year.
We lived ten hours away from her but she always thought of us. Tom passed away in January and I hope him and Aunt Catherine are enjoying their heavenly home!
Prayers for peace for Aunt Catherine’s children and extended family. What a caring woman she was!