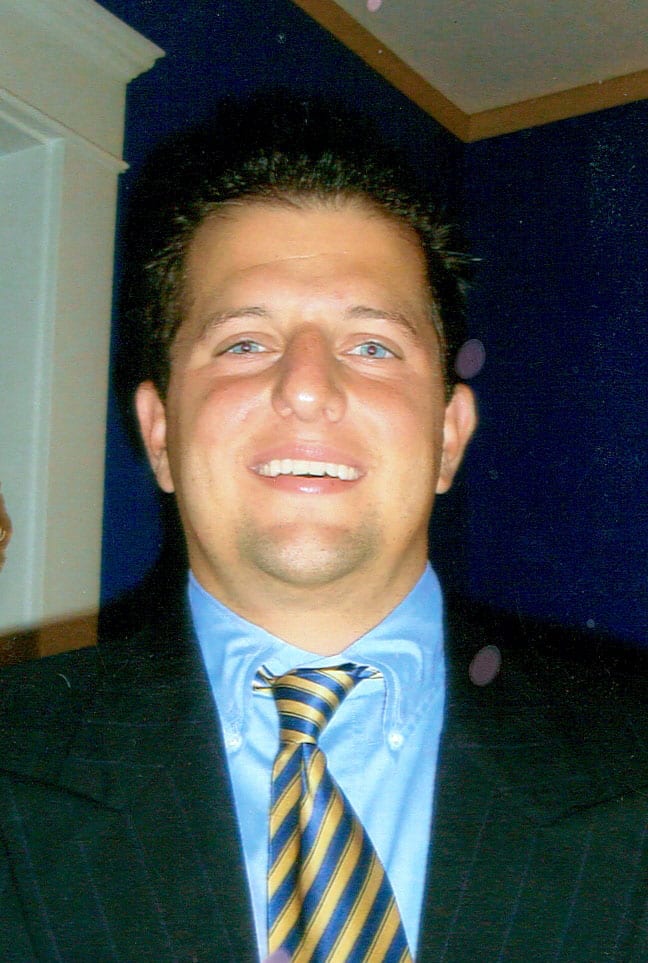 David Sidiropolis departed this Earth and his family suddenly on April 29, 2018 at his home in Wheeling. David was a substitute teacher in WV after just completing his teaching certification. David was born on December 31, 1980 to George T. Sidiropolis and Donna L. Takach Sidiropolis. David is survived by his parents, his brother George N. Sidiropolis, his cousins Mark T. Sidiropolis, Joann Marshall Hockenberger, Lisa Takach Tucker and Christy Takach Tucker, his paternal aunt Barbara Sidiropolis Marshall and uncle Ron Marshall and his maternal aunt Debbie Wilson Takach and Dave Takach, as well as his beloved dog Luke. David was preceded in death by his paternal grandparents Thomas and Josephine Sidiropolis and his maternal grandparents Paul and Geraldine Takach, his aunt Rita Paisley Takach, his Uncle Frank N. Sidiropolis, his cousin Anthony Marshall Masciola as well as his beloved dog Champ. David graduated from Wheeling Park High School in 1999 where he was elected class president three years in a row and won a State Championship as best individual overall speaker. David assisted the Elks with the Drug Free Schools of America and many other efforts to enrich the community. David graduated from Wheeling Jesuit University with degree in Political and Economic Philosophy and secured a masters degree in organizational leadership. David enjoyed volunteer work and public service, including coaching the Wheeling Park High School Debate Team and was active in West Virginia politics. David was a devoted son who had an extraordinary relationship with his family and many friends. He was an avid sports enthusiast who enjoyed playing fantasy football. David loved the Pittsburgh Steelers and was a diehard Mountaineer fan. David had a tremendous sense of humor, caring character and left the world better than he found it.
Friends will be received from 5-9 pm, Thursday, at the Altmeyer Funeral Home, 1400 Eoff Street, Wheeling. Friends will then be received from 10 am until time of Mass of Christian Burial at 11 am, Friday, May 4, 2018, at St. Vincent de Paul Catholic Church, Elm Grove, Wheeling, with Rev. Msgr. Paul Hudock as celebrant. Private interment will follow in Mount Calvary Cemetery, Wheeling.

Memorial contributions may be made to the Wheeling Park High School Debate Team, 1976 Park View Road, Wheeling, WV 26003, or online at www.TMCfunding.com. (Click Here).  Online condolences may be offered to the family at www.altmeyerfuneralhomes.com.

Dave is simply amazing! Blessed are all of us who were fortunate enough to have known him. He will forever be remembered and missed. Prayers to all.

We only just learned of David’s passing and am truly sorry. Our hearts and prayers go out to you and all the family for this devastating loss. Roy & Karen Estep and family

My sincerest condolences to the family.

My condolences to a great family. May you find comfort in each other and fond memories during this difficult time.

One of the best friends I made during my time in West Virginia. Made me welcome with his family. A good man! I affectionately nickname him Tango. I will never forget him.

Prayers to you and your family

Our deepest sympathies. If you need anything please don’t hesitate to ask.

David I always had fun memories of you. I am glad to have met a guy so exceptional life you, a true kind person.

George and Donna. Condolences from your Baltimore Family. Our heart felt sympathies to you both, George and Mark.

I was so shocked and saddened by the passing of David. I worked with David at the Weirton Office of the West Virginia Lottery. He was a wonderful person and I enjoyed getting to know him. This was quite a few years back, but I have always had fond memories of him. My prayers and sympathy to David’s family