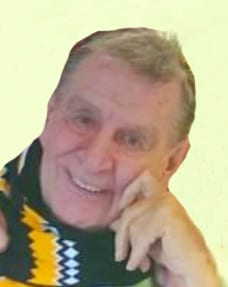 David Wayne Smith, 75 of Good Shepherd Nursing Home formerly of Glen Dale, WV went to be with his Lord on Saturday, November 28, 2015.  He was preceded in death by his parents, William Vernon Smith and Elizabeth E. Chison Smith and a brother Roger F. Smith.  He is survived by his wife of 49 years Eleanor I. Smith and daughters Lisa Ann Phares (Chuck) of Morgantown, WV Anna Marie Smith (Brent) of Glen Dale; brother, William Vernon “Bud” Smith Jr. of Glen Dale; sister, Sara Jane Walters of Moundsville; grandchildren, Amber E. Phares, Zack C. Phares, Breanna E. Cain and Brandon S. Cain.  David was a retired employee of Wheeling-Pittsburgh Steel Benwood Plant a US Navy veteran and a member of St. Francis Xavier Church, Moundsville where he enjoyed setting up for the Festival and working the beer stand.  He was a Mountaineer and Steelers fan and loved riding his motorcycle with his wife.  They traveled most of West Virginia and the Ohio Valley. He was a third and fourth degree member of the Knights of Columbus Council #1907, Moundsville where he was active in the Tootsie Roll campaign and fish fries.  David enjoyed spending the winters in Florida, going to the beach and traveling around the state.  At home he was very proud of his yard and enjoyed taking care of it and his house. There will be no visitation.  A Memorial Mass will be celebrated Tuesday, December 1, 2015 at 2:00 pm at the Good Shepherd Nursing Home Chapel, 159 Edgington Lane, Wheeling.  A Mass of Christian burial will be celebrated Wed., December 2 at 11:00 am at St. Francis Xavier Church, Moundsville with Rev. That Son Nguyen as celebrant.  Interment will be in Mt. Calvary Cemetery, Wheeling with the Moundsville Veterans Honor Guard conducting Military Graveside services.  Arrangements by the Altmeyer Funeral Home, Lutes & Kirby-Vance Chapel, 118 Grant Ave., Moundsville.  Memorial contributions may be made to the Good Shepherd Nursing Home Activities Fund, 159 Edgington Lane, Wheeling, WV  26003. Online condolences may be made to the www.altmeyerfuneralhomes.com

My condolences to David’s wife, Eleanor, and their children. I attended Bishop Donahue High School with David. David comes from a wonderful christian family, and consequently he was a fine person and good christian. May He Rest in the Peace and Love of Our Dear Lord, Jesus.

My prayers and sympathy are with you on the loss of your husband, father and brother. David had a very successful life and served both God and Country. I taught both David and Sarah Jane in the primary grades at St. Francis Xavier in Moundsville many years ago.
May eternal rest shine upon David.
Sister Mary Florence

Eleanor, please know that you are in my thoughts and prayers in this difficult time. David is at peace and resting in God’s grace and love. He was a blessing in your life and will be your angel always. God bless you with comfort and peace. Let’s keep in touch.

May your memories of David Wayne Smith, give you peace, comfort and strength…

Eleanor:
I’m so sorry to hear about David. I hope you are doing okay. You will be in my prayers that you will find peace in your wonderful memories and with your daughters and their families.
Take care.
With deepest sympathy, Don and Nancy