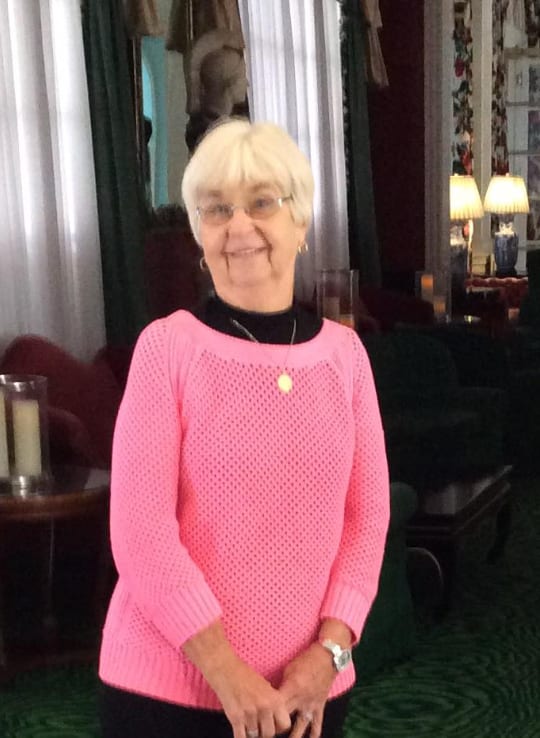 Born January 11, 1941 in Wheeling, W.Va., she was the loving daughter of the late Joseph and Helen Mozney.

She was preceded in death by her husband, James (Jim) Westfall, her sister Josephine (Mozney) Myer, her niece Jacqueline Klug and her nephew, Greg Myer.

Della is survived by her son, James (Vickie) Westfall and two grandchildren, Madison and Nolan of Wheeling; her sisters, Mary Ann (Mozney) Lokmer of Wheeling, Sandra (Mozney) (Daniel) Klug of Basye, Virginia; Carol (Mozney) Baron of Zanesville, Oh.; and her brother Jacob (Joe) (Suzy) Mozney of Wheeling; along with her endeared companion Russell McMahon, her nieces, relatives, and many friends.

Della retired from the Children’s Home of Wheeling, where she was Director of Food Service.  After retirement, she actively volunteered in several local charities, as The Soup Kitchen of Greater Wheeling, Habitat for Humanity, Marshall County Election Poll Worker; and in local activities, as on the local Sons of Italy Bocce Ball and other bowling league teams.  Della and Russ later took to the dance floors of the Ohio Valley and enjoyed cruising to many ports around the world.  She was her grandchildren’s most avid fan, endlessly attending their sports games.

She graduated from Triadelphia High School in 1958.

Family and friends will be received on Thursday, September 14, 2017 from 2-4 pm and 6-8 pm at Altmeyer Funeral Home, 154 Kruger Street, Wheeling.  Mass of Christian Burial will be on Friday September, 15, 2017 at 11 am at St. Vincent de Paul Catholic Church, Elm Grove with Rev Chuck McGinnis as celebrant.  Interment to follow at Mt. Calvary Cemetery, Wheeling.

Vigil services will be held on Thursday at 7:30 pm.

Jimmy, so sorry to hear about you mom. I have a lot of great memories of time spent with her and your dad. I will keep you in my prayers.

So sorry to hear of Della’s passing. She was well loved and respected by all at The Children’s Home of Wheeling. rest in peace

We’re sorry for your loss. Russ is out of town and I am unable to make it. RIP Della

For a beautiful, kind hearted women. We’ll all mis Della.

Della was a wonderful friend to me when I worked at Orchard Park daycare center. We often opened the daycare together. I loved her very much. She made the best French roast and pancakes.

We are so sorry to hear of Della’s passing. She was a wonderful person, kind and generous to all. I have known her since we were teen-agers working at Isalys. She and Jim were the best friends you could ask for. Our thoughts and prayers are with her family. Don and Judy Gaus

Sorry for your loss. The best friend that a bereaved family can have, is our heavenly Father. The God and Father of our Lord Jesus. He is the hearer of prayer and the God of all comfort, who comforts us in all of our trials. May you all find comfort as you pour out your hearts in prayer to him, because he cares for you. 1 Peter 5:7; 2 Corinthians 1:3, 4.

Della will be missed, especially her smile. We enjoyed a lot of good times at dances with her and Russ. Can’t believe she is gone. Our prayers are with her family and Russ. We know an angel in heaven now.
God Bless, Cindy and Gary