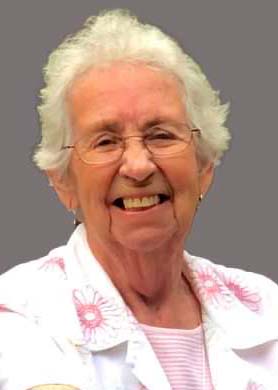 CHRISTMAN, Delores A. (Carr), 86 of Wheeling, WV died on March 18th 2022 in Warrenton, VA.
She was born on September 17th 1935 in Wheeling, the daughter of the late Alvin and Emma Baron.
In addition to her parents, she was preceded in death by her husband John H. Christman Jr. and sister Mary Louise Cole of Wheeling.
Delores is survived by daughter Linda Costello and her husband Brian of Warrenton, VA; son Mark Christman and his wife Michelle of Wellsburg, WV. She is also survived by her 6 grandchildren; Lindsey Peacock and her husband Brandon; Tyler Costello and his wife Mary Beth; Meghan Cummins and her husband Mathew; John Christman; Katie Costello and Logan Christman. She adored her 5 great grandchildren Adalynn, Logan, Lakin, Abel and Evelynn.
Family and friends will be received Thursday March 24 from 2-5 p.m.with a prayer service following at the Altmeyer Funeral Home. 1400 Eoff Street, Wheeling, WV. Interment will be private at the convenience of the family at Mt. Calvary Cemetery, Wheeling.
Memorial contributions may be made in memory of John and Delores Christman to Our Lady of Peace School, 640 Fairmont Pike, Wheeling, WV., 26003

Linda, Mark and family, so sorry to hear about your mom. She was a wonderful woman and I have so many great memories of growing up being neighbors in Mozart Meadows. Sending thoughts and praryers from the Raske family.

A candle for a lovely lady. May she rest in peace with our Lord.

Sorry for your loss., Prayers for God’s comfort and understanding

We loved Delores, loved sitting out back and talking with her. I (Sue) especially appreciated her knowledge of plants and flowers. A wonderful neighbor, we’re going to miss her.