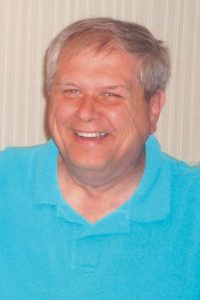 Donald Joseph McCormick, 67, of Moundsville, WV, passed away Friday, February 22, 2019, at home with family.
He was born April 7, 1951, a son of the late Donald L. and Mary Ann “Molly” (Fahey) McCormick. Don was a member of St. Francis Xavier Catholic Church. He retired from Wheeling Park High School, after 32 years, as a special education teacher. Don was a member of the Knights of Columbus No. 1907 in Moundsville, Fourth Degree Assembly in Moundsville, Ancient Order of Hibernians and St. Vincent de Paul Society. An extremely active member in the community, Don coached basketball at Wheeling Park High School for 20 years, Scoreboard Operator for Wheeling Park at Wheeling Island Stadium, Wheeling Park Basketball Scoreboard Operator, a former teacher and Special Olympics Coach at the School of Hope in Belmont County and was the North Pole celebrity visitor at WTRF Channel 7, with numerous civic organizations, schools, family and friends.
Don is survived by his loving wife of 46 years, Ellen S. (Carpenter) McCormick; two sons, Mark (Megan) McCormick of Concord, NC, and Timothy McCormick of Moundsville, WV; five brothers, Timothy P. (Dee) McCormick of Wheeling, David M. (Beth) McCormick of Columbus, OH, Kevin R. (Shelia) McCormick of Wheeling, Terry McCormick of Wheeling and Patrick S. (Carol) McCormick of Wheeling; one sister, Maureen (Jim) Osborne of Glenwood, MD; four grandchildren, Dylan McCormick of Cambridge Ontario, Canada, Declan, Callen and Flynn McCormick all of Concord, NC, and a large extended family with many aunts, uncles, nieces and nephews, and a special thank you to Aunt Betty.
Family and friends will be received Tuesday, February 26, 2019 from 2-8 pm, at Altmeyer Funeral Homes, Lutes & Kirby-Vance Chapel, 118 Grant Ave. A Mass of Christian burial will be held Wednesday, February 27, at 11 am at St. Francis Xavier Catholic Church with Fr. That Son Ngoc Nguyen as celebrant. Inurnment will be held at the convenience of the family.
Memorial contributions may be made to an organization of the donor’s choice, with consideration for all of Don’s passions.
Condolences may be offered to the family at www.altmeyerfuneralhomes.com.

Ellen and family, we are so sorry to hear of Don’s passing! Our thoughts and prayers for you and your family!

Carol, Pat, and the McCormick family – I am so very sorry for your loss. I will keep you and your family in my thoughts and prayers.

John and I send our love and sympathy to all the McCormicks. Don was such a sweet and kind man. I was a sub for Ohio County Schools, and had the privilege of sharing my day with him in Special Ed. He was so gentle with all those kids, especially one little and very fragile girl, who always loved him to hold her.
He will be remembered to us most, as Santa, as our daughter Kerri was “Crissy” the elf with him on WTRF channel 7 on Saturday mornings.

I have lots of fond memories of Don from our days together at St. Joe’s Prep Seminary. I can still hear his laugh and the intensity of his desire to excel at whatever sport we were playing but especially basketball. I am sure Don’s life has been rich and full and those that had the opportunity to meet him were truly;y blessed. My heartfelt sympathy goes out to Don’s family but I am sure they are filled with the joy we all are for the time we had with him.

I am sending my thoughts and prayers to Don’s family. I as truly sorry to hear of his death. I have many happy memories from our high school days at Vienna WV. I will celebrate a Mass for Don and keep all of you, his family, in my prayers.

I have so many fond memories of playing basketball for Coach. He was always able to show that he cared for his players, to teach them the game of basketball and most importantly, have fun while playing. Some of my best memories were those days when the JV team would scrimmage and outplay the varisty. I can still see Coach’s grin after Coach Andy sent us back to the other court becasue we played so well! Above all else he continued to be a friend after those high school days, always sharing a freindly hello and open for conversation. Sorry that I wasn’t able to share in the visitation. The family is in my thoughts and prayers.

Ellen and family, my deepest sadness at this news of a good friend of mine, Donald. I will be offering a Mass for his soul on Thursday, 28th, here in my monastery here in Big Sur CA. He was a dear friend on mine and hate to hear of his passing. He was an old Corpus Christi classmate and St. Joe Prep classmate too. I will be praying for you also Ellen and family, the sons. Blessing, Fr. Dean Naegele

Prayers to you all Gator and family. Keep your memories close to your heart.

Prayers to you all Gator and family. Keep the memories close to your heart!

My home room teacher @WPHS. We really enjoyed his humor and a genuine nice guy. Very sorry to hear of his passing….1980 grad.