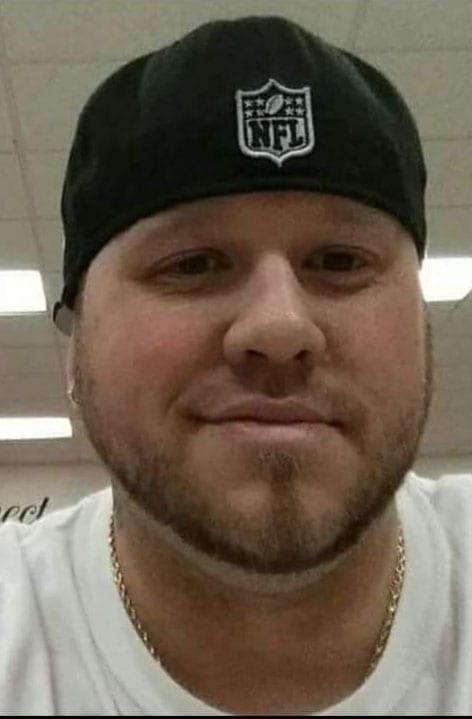 Doug was born November 27, 1979, in Wheeling, a son of Donald L. Nolte of Wheeling and the late Sondra K. (Morgan) Nolte. He was a Methodist by faith; a graduate of Wheeling Park High School; and an employee of Cardinal Health, Wheeling. He was also formerly employed at Wheeling Downs as a greyhound trainer; an avid Raiders fan; and an organ donor.

In addition to his father, Doug is survived by his two brothers, David (Christine) Nolte of St. Clairsville, Ohio and Jeffrey Nolte of Wheeling; his sister, Diane (Robert) Bennett of Wheeling; and his nieces and nephews.

Friends will be received at the Altmeyer Funeral Home, Elm Grove Chapel, 154 Kruger Street, Wheeling, on Friday, from 12-3 & 5-8 pm, and Saturday, June 2, 2018, from 11 am until time of service at 1 pm, with Pastor Jeffrey Nolte officiating.

In lieu of flowers, the family suggests that memorial contributions be made to Miracles Happen, 201 Edgington Lane, Wheeling WV 26003, or online at www.TMCfunding.com. Online condolences may be offered to the family at www.altmeyerfuneralhomes.com.

My Condolences to the family in this hard time,may God bless you with peace and healing,

To Doug’s family and friends,
May you find comfort in knowing how many people loved and cherished Doug, and may his memory forever be a blessing for you all. He will be missed about mourned by many of us. God bless.

Dougie some of my hreatest memories are of us just always clowning at youth group and on retreat! You were always the comedian making everyone around laugh! You, Brent Nixon, Greg Harris and Eric DeVault will always be in my heart for some crazy nights at the Elm Grove United Methodist youth group and retreats! Rest in Peace my dear friend, until we meet again…

So sorry for your loss. sending prayers your way.

To the entire Knolte family ,I am so sorry for this devastating loss. Doug was like a son to me when he and Greg were growing up you never saw one without the other. My family was blessed to have had Doug in our lives. We have so many fond memories of Doug,,he will be deeply missed.

To the Nolte family:

I wanted yo send my deepest condolences to the Nolte family. The memories of him will help to ease your pain of sorrow.

I hope & pray that these Scriptures will bring you a measure of comfort until the fulfillment of them.

Didn’t know Doug very well, just had a few classes together Senior year. We had Anatomy class together, he sat in front of me & we always hated on the teacher together. Was genuinely a nice person. Rest easy Doug, your work is done.

RIP Nolte! Your were a great guy so sad you are gone so young. You will be missed by hundreds of people. You may be gone but you will never be forgotten. RIP Nolte (Class of 1998)

I was so sad to hear about Doug’s passing. He was such an amazing,person. So many great memories. Prayers for your family to,make,it through this tough time.He Wil be missed. ❤❤❤

May you forever rest peacefully and provide strength to others! Be an angel and a guide to those closest to you ❤️