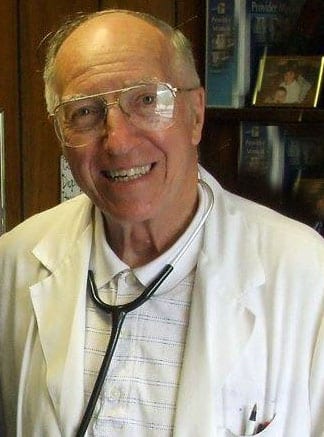 Dr. Joseph L. Williams passed away on March 29, 2016 at the age of 86. He was born on December 20, 1929 in Batavia, NY, the son of William H. Williams, Sr. and Katherine Ellen Grimes Williams, who predeceased him in 1981 and 1980 respectively. He graduated from Batavia High School in 1947 and then from the University of Rochester undergraduate school in 1952 and then from the University School of Medicine in 1956. He then interned at the Kings County Hospital in Brooklyn, NY and then spent two years in the United States Air Force in San Antonio, TX, attaining the rank of Captain and Flight Surgeon. He then spent 1 1/2 years at the Miners Hospital in South Williamson, KY, after which he settled in the Ohio Valley, spending exactly 50 years in group practice at the Bellaire Clinic and private practice as a Family Physician. He was a long time member of the Belmont County Medical Society, the American Medical Association, and the Society of Family Physicians. He retired in 2011.

Dr. Williams married Lauretta Schulze in 1956 and they felt blessed to have enjoyed an idyllic life together for nearly 60 years, with many memorable trips and cruises around the world, one of the most memorable being a three week family trip in a station wagon with six children across the United States and back. Joe and Lauretta were the proud parents of six children: Mark (Mary Sue) Williams, Julie (Reynaldo) Mena, Deborah (Paul) Kuhn, Margaret (Ron) Baker, Peter Williams, and Christopher Williams (deceased). Joe was one of six children: Bill Williams (deceased), Bob (Kay) Williams, Donald (deceased), Jerry Williams, and Shirley Card. He also had sixteen grandchildren: Jennifer, Sarah, Jade, Trey, Joe, Katie, Kelly, Corey, Kristina (deceased), Caroline, Cameron, Cassidy, Alexandria, Christopher, Elaina, Cheyenne, and Jasper; He also had three great grandchildren: Piper, Calvin, and Kristin. Joe had a lifelong love of the game of tennis which began at the age of 10 with his younger brother Jerry. He also engaged in golf, sandlot baseball, football, bowling, handball and squash over the years. Bridge, scrabble, cribbage, and backgammon were also a big part of his life. He attended Our Lady of Peace church for many years. He will be remembered as having a “corny” sense of humor, tending to be a “Devil’s Advocate” and always being “well-intentioned.”

In accordance with Joe’s wishes, there will be a visitation on Friday, April 1, 2016 from 2-4 PM and 6-8 PM at Altmeyer Funeral Home, Elm Grove Chapel, 154 Kruger Street, Elm Grove with Joe’s Eulogy being held at 8pm. Visitation will also be held again from 10-11am at Our Lady of Peace Catholic Church, Sherrard. Mass of Christian burial will take place at Our Lady of Peace at 11:00 AM on Saturday, April 2, with Rev. Dennis Schuelkens serving as Celebrant. Interment will follow at Mt. Calvary Cemetery, Wheeling. A luncheon will be held at the Parish Hall following the service. Friends may say their goodbyes at the church during the hour before the service. Memorials may be made to the Catholic Neighborhood Center or the Soup Kitchen in Wheeling c/o TMCFunding.com.

I was a nurse at Bellaire Hospital for 12 years , and loved “Jolly Joe” . My birthday is April 1st so he loved playing April Fools Jokes on me. My favorite was when he dressed up as a nurse with white hose and uniform. I loved his sense of humor . I just found out he passed away. I wish I could have said goodbye ……. I worked with daughter Peggy too, who is awesome just like him

My condolences to the family & many friends of Dr. Joseph Williams. I had worked with him throughout the 80’s at Bellaire City Hospital & found him to be a very knowing, compassionate Dr. with not only his patients but of others he would cover for. Loved his sense of humor & quick wits in an emergency situation. Will be sadly missed by all who knew him.

Grateful to have spent many Friday evenings with Dr. And Mrs. Williams playing Scrabble with them and my high school boyfriend, Christopher Williams. Dr. Williams also instilled in me the importance of goal setting. The week before New Year’s he would ask what those goals are and then periodically checked through the year to gauge progress. To this day, I still follow his methodology of goal setting. And, one of our family traditions with my children is Scrabble game night. Thanks Dr. Williams for sharing your wisdom and love.

Heaven has just received another angel. Uncle Joe was a man of many interests, But, family was number one to him. Whenever I hear of cribbage, golf and tennis, I will always think of him. He was greatly loved and will be greatly missed.

Our thoughts and prayers are with the family. He will be missed but will stay in our hearts.
Satinder and Teji

Joe was the personification of the word sportsman. An excellent tennis player, I tried for years to persuade him to play in the seniors, but most of all he was a gentleman who never lost his cool and exuded an infectious joy in playing the game. I always believed if one wanted to discover the true breadth of a man get him into a high stakes poker game or sweating in a closely contested athletic event. Joe was tested and his mettle showed for everyone to enjoy and respect. I will miss him and so will this world.

This candle is lit in memory of a great family man and doctor who always had a smile on his face and shared a wonderful sense of humor!

May your memories of Joseph L. Williams, give you peace, comfort and strength…