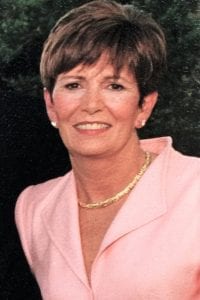 Edith C. Altmeyer, 79, passed away Monday, April 19, 2021 in Virginia Beach, Virginia. Edi was born February 6, 1942 to the late Major General (Ret) Carl Darnell and Virginia Rodgers Stoney in Manhattan, Kansas. She graduated from the Laguna Blanca School in Santa Barbara, California and graduated from the University of California, Santa Barbara.  She met the love of her life, Jim, while visiting her father in Hawaii. They were engaged in eight weeks and married in six months.  Jim and Edi were married on November 30, 1963 at Old Mission Santa Barbara in California.

Edi loved going to the sporting events of her four children and thirteen grandchildren. She enjoyed spending time on the beach, knitting, and had a passion for reading. Upon moving to Virginia Beach, Edi and Jim became involved in breeding Toy Poodles. One of their poodles, Susie, won “ PCA Best Toy Poodle in America.” She went on to compete at the Westminster Show in New York City. Above all else, her true love was spending time with her grandchildren.

A visitation will be held on Sunday, April 25, 2021 at Altmeyer Funeral Home, 5033 Rouse Drive, Virginia Beach, Virginia from 12:30 p.m. until 3:30 p.m. A Funeral Mass of the Resurrection will be celebrated Monday, April 26, 2021 at 1:00 p.m. at Star of the Sea Catholic Church, 1404 Pacific Avenue in Virginia Beach, Virginia. Interment will be at Arlington National Cemetery at a future date.

Donations may be made to either Catholic Charities Social Outreach or David K. Rose Scholarship Fund.  Condolences may be left for Edi’s family below.

Jim and Family, our hearts are so heavy for you. – Tina & Bob Zaleski

Jim-So sorry to hear about your loss-you and your family will be in my prayers.

Jim and family, my deepest condolences to the entire Altmeyer family. She was and always will be a very special lady.

Dear Jim and and family, you are in our thoughts and prayers during this hard time. I have sure great memories of Edie and she was a beautiful person. Sending our love and hugs, Mary and Gary Hamilton

Jim, so sorry to hear about Edi, I only met her once at a Rotary function or the Sisters of St. Joseph reverse raffle. You and she made such a NICE couple, kind, respectful, and volunteer strong. My prayers for you and your family as you cope with the loss of a loved one. Helping others through those times as you have done for decades may not automatically help you, but, know that she is at peace and in the arms of her Savior.

Jim and family sorry for your loss

With deepest sympathy and a lifetime of fond memories know how much we appreciate Edi, Jim, the entire family and all you have done for others through the decades. We feel your pain from afar and know her spirit in time will mend your broken hearts. RIP Edi & God Bless. You are most certainly at Gods side.

Jim, Jimmy and family ~ Deepest sympathy for Edi’s passing. Prayers for all at this sad time. May she Rest In Peace and Rise in Glory, and may her memories be a blessing for you. ❤️✝️ Amen.
Our love, Mary Ruth and Bob Cilles