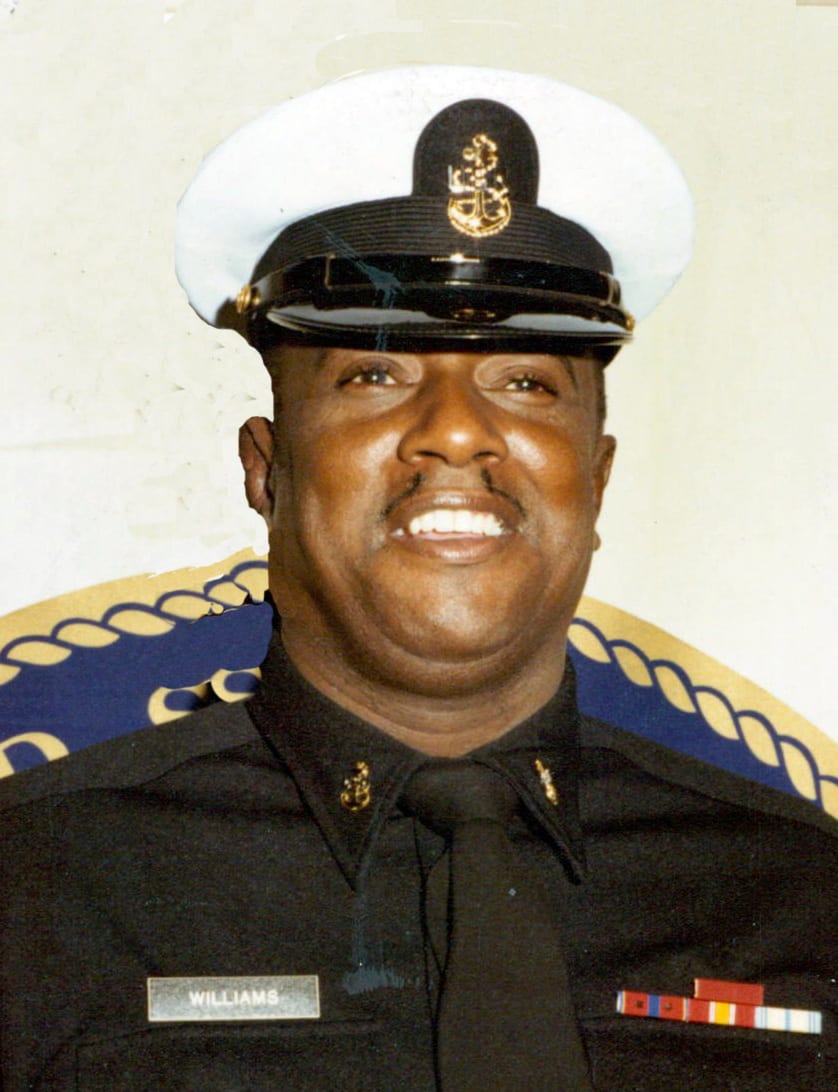 Edward Donald Williams Sr., 78, of Triadelphia, WV, died Wednesday, September 16, 2015 at home.
He was a retired Chief Petty Officer in the United States Navy, a retired employee of AT&T, a former employee of McKeen Security as a courtesy driver at Wheeling Hospital,
a member of St. Vincent dePaul Catholic Church, Wheeling, American Legion Post #89, and the Panhandle Elk’s, Lodge # 74.
He is preceded in death by his wife, Dorothy Jones Williams, one son, Edward Williams Jr.
Surviving is one son, Michael Williams of Arizona, a special friend, Margaret Platt of Bridgeport, OH.
Family and friends will be received 4-8 p.m. Monday at the Altmeyer Funeral Home, 154 Kruger Street, Wheeling, where funeral services will be held Tuesday, September 22, 2015 at 11:00 a.m.
Interment with full military honors in Park View Memorial Gardens, Wheeling.
Offer condolences online at www.altmeyer.com.

My deepest condolences to Mr. Williams family. Ed was a very important person in my life when I was growing up. My brothers and I looked up to Ed, and we shared some great memories of him in his honor yesterday.

We will miss you Ed!

Sorry to hear of Ed`s passing. I met Ed, in the 1970`s. When we were refereeing basketball games. Ed loved sports and was a proud United States Navy veteran. Our prayers to him and his family.

We both met Ed through the telephone company family. When I found out he knew several of my brothers, because of sports, it made our working friendship a true all around friendship. Paths may have been rocky for Ed at times but spirit and love of life gave him reason to succeed and enjoy that life. He always greeted us with his special smile that matched his special personality! He was certainly one of a kind! God Bless!
Geneva & Steve

My deepest condolences goes out the Williams family in time of sorrowWhen our loved ones die, we mourn. And we may ask: ‘What has happened to them? Are they suffering? Are they watching over us? Can we help them? Will we ever see them again? THESE are questions that people have thought about for thousands of years. They are important questions. No matter who we are or where we live, the answers concern each one of us At such times, we need to go to God’s Word for comfort. (Read 2 Corinthians 1:3, 4.) The Bible helps us to understand how Jehovah and Jesus feel about death Jesus taught that someday “all those in the memorial tombs” will be resurrected. (John 5:28) How , though, does Jehovah feel about resurrecting the dead? The Bible teaches that he is eager to raise the dead. The faithful man Job asked: “If a man dies, can he live again?” Job was speaking about waiting in the grave until the time came for God to remember him. He said to Jehovah: “You will call, and I will answer you. You will long for the work of your hands.”​—Job 14:13-15.
15 Just think! Jehovah longs for the time when he will bring the dead back to life.Right here on a paradise earth (Psalm 37:9-11) Is it not heartwarming to learn that Jehovah feels that way if you have any questions you may contact me at the E-Mail address below Thank You Mrs Gloria Brown

May your memories of Edward Donald Williams, give you peace, comfort and strength…