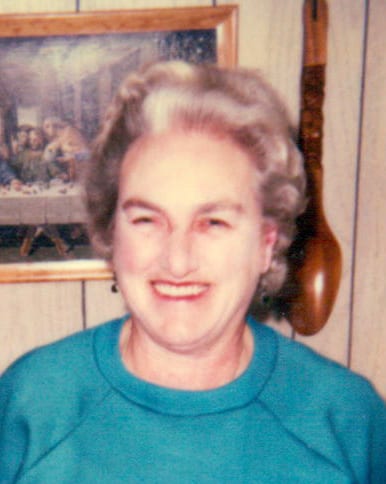 KELLY, Elizabeth “Betty” A., 87, of Bridgeport, Ohio, died Sunday, February 14, 2016 at Wheeling Hospital.
She was born August 23, 1928, in Wheeling, W.Va., a daughter of the late Michael E. and Josephine (Lieb) Lally. She was a member of St. Alphonsus Catholic Church in Wheeling and a member of the Bridgeport American Legion Post 227 Auxiliary.
In addition to her parents she was preceded in death by her husband, Jerry Kelly, one son, Jerry J. Kelly, and three sisters, Mary Jo Gossett, Eleanor Bechtel, and Margaret Dunaway.
Surviving are her four children, Patrick J. (Janet) Kelly of Lansing, Ohio, Michael P. (Lisa) Kelly of St. Clairsville, Ohio, Edward A. Kelly of Bridgeport, Ohio, and Linda J. Kelly of Bridgeport, Ohio; one sister, Theresa D. Lally; four grandchildren, Jeremy, Brandon, Nikol, and Noel Kelly; and numerous nieces and nephews.
Friends will be received on Wednesday, February 17, 2016 from 4-8 pm at the Altmeyer Funeral Home, 1400 Eoff Street, Wheeling, where a vigil service will be held Wednesday, at 7:30 pm. Mass of Christian Burial will be celebrated on Thursday, February 18, 2016 at 10 am at St. Alphonsus Catholic Church, Wheeling, with Rev. Richard Shoda as celebrant. Interment will follow in Mount Calvary Cemetery, Wheeling.
In Lieu of flowers, memorial contributions can be made to the charity of the donor’s choice.
Online condolences may be expressed to the family at www.altmeyerfuneralhomes.com

I am so very sorry to hear of your mother passing. My love and prayers to you at this sad time. Knowing Pat and Ed, she had to be a great mom to raise such fine sons. Love to you.

The best friend and a wonderful person. Our prayers are with her family. I will miss her very much.

So sorry for the loss of your mother. Thinking of your family at this time.

SORRY FOR YOUR LOSS PRAYERS BE WITH YOU.

Sorry for your loss. Prayers for all of you.