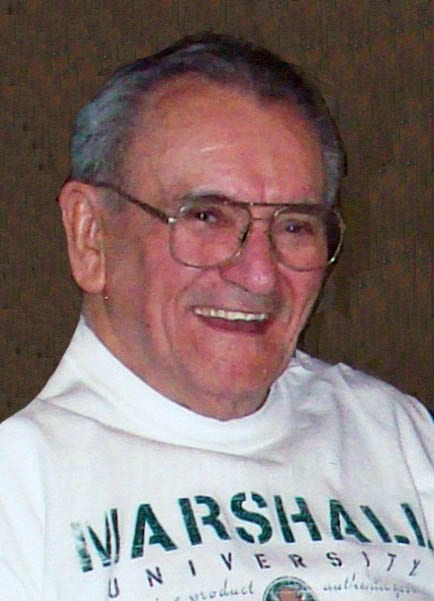 Botizan, Eugene Bernard “Gene”, 95, of Wheeling, died Monday November 6, 2017 in Good Shepherd Nursing Home, Wheeling.
He was born March 21, 1922 in Benwood, the son of the late Eli and Mary Botizan Sr.
Gene was a retired bridge inspector for the state of West Virginia ; a mutual manager for Meadows Race Track; a member of St. Alphonsus Catholic Church, Wheeling ; a U. S. Army veteran of World War II; and a long time member of the PAP Club
In addition to his parents, he was also preceded in death by his wife Stella Obyc Botizan in 2000, a son Gregory Botizan, a daughter, Cynthia Botizan, three brothers, John, Eli and Virgil Botizan, two sisters, Helena and Mary Botizan.
Surviving are three sons, David Botizan (Tama) of Wheeling, Donald Botizan (Marcy) of Wheeling, Ed Stein (Rhea) whom Gene thought of as a son, five grandchildren, Erik Botizan (Lisa), Aaron Botizan, Brett Botizan, Shanne Botizan and Bobby Niemeyer (JC), three great granddaughters, Eriana Botizan, Kaludia Botizan and Ayaysia Botizan, several nieces and nephews.
Family and friends will be received on Wednesday, November 8, 2017 from 6-8 pm at Good Shepherd Nursing Home Chapel, 159 Edgington Lane, Wheeling. Mass of Christian Burial will be Thursday, November 9, 2017 at 10:00 am with Fr. John Beckley as celebrant. Entombment to follow at Mt. Calvary Mausoleum, Wheeling.
In Lieu of flowers, memorial contributions may be made to Wheeling Central High School, 75 14th Street, Wheeling, WV., 26003.
Arrangements by Altmeyer Funeral Home, 1400 Eoff Street, Wheeling.
Online condolences may be made to the family at www.altmeyerfuneralhomes.com

I am so sorry for the loss of your loved one. Please be comforted by God’s promise that one day soon death, mourning, and pain will be gone from the earth forever. (Revelation 21:4) Until that time, may the love and support of family and friends help to ease the pain of your loss.

So sorry to learn about your father.

Mr. Botizan you will be missed dearly by the Vees Family. Our family and yours have been through the so much with my family during our growing years. We send you and your family love and know that you and Gary will be in heaven o sharing stories of how the boys were always in trouble on the island. Rest in Peace sweet friend. The Vees Family

My sincere and deepest condolences to the family and friends of Mr. Botizan. Denny Albaugh

May your memories of Eugene Bernard Botizan, give you peace, comfort and strength…