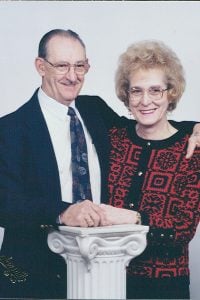 She was born February 26, 1932, a daughter of the late Frances and Edna (Scheeser) Metzger. Evelyn was a member of St. Alphonsus Catholic Church and the Elks Lodge #28. She was a devout Catholic, devoted wife and mother and enjoyed dancing.

In addition to her parents, she is preceded in death by her loving husband, of 65 years, Thomas “Mack” McKenzie Sr. (2017), one brother, Frank (Marie) Metzger and two sisters, Connie (Joe) Moore and Bernice (Jack) Curtis.

Evelyn is survived by her four sons, Thomas (Janet) McKenzie Jr., Robert McKenzie, Ronald (Debbie) McKenzie and Donald McKenzie all of Wheeling; brother-in-law, Raynor Burkle ; five grandchildren, ten great-grandchildren; a very special niece, Anna Marie Duymich and several other nieces and nephews. She will be missed by many.

Family and friends will be received Monday, November 18, 2019, from 2-4 & 6-8 pm at Altmeyer Funeral Homes, Elm Grove Chapel, 154 Kruger St. Mass of Christian burial will be Tuesday, November 19, at 10 am at St. Alphonsus Catholic Church. Interment will be held at Mt. Calvary Cemetery.

Memorial contributions may be made to St. Alphonsus Church by clicking here.

I know she will be missed by all. God bless you that you had her in your life. My deepest condolences.

My condolences, your parents were such good people and good friends to my parents, just wanted you to know my wife and I are thinking of you.

Tom, Bob, Ron, Don, and Families,
Sorry to hear of your moms passing. Please take comfort in knowing your mom and dad are together again. I have fond memories of their dedication to the youth of North Wheeling. Please accept my sincere condolences.
Mike

From the Lesak family we send our condolences. Mrs. Mac was a special lady and I know Mr. Mac was waiting and they will take care of each other. My dear friend Tom, you are the patriarch of the family and I know you will comfort them.

A beautiful video tribute to a lovely lady. Prayers to the family.

To the Mckenzie family sorry for your loss