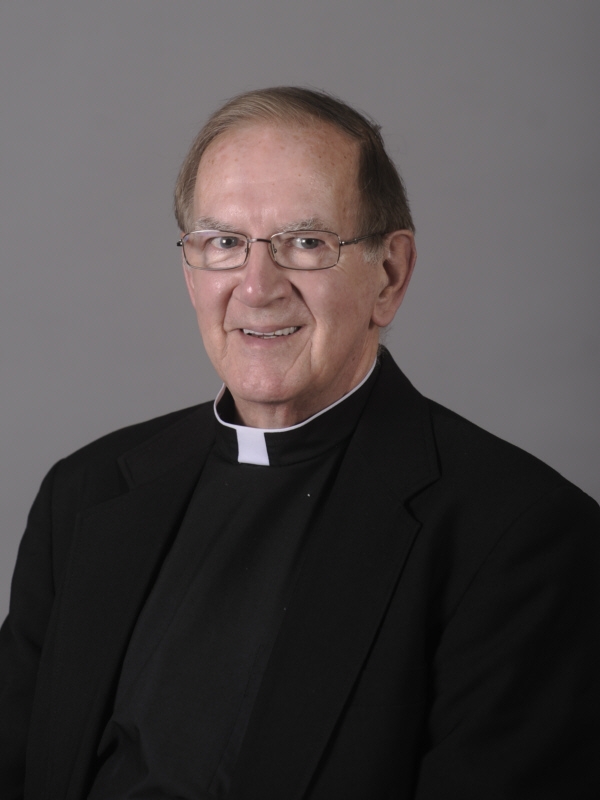 Father John N. Duhaime died April 7, 2022. He was born in Manchester, N.H., on Dec. 17, 1939, to Cecile and Ovila Louis Duhaime. He was preceded in death by his parents and by his brothers: Guy Duhaime, Lionel Duhaime, Victor Duhaime, and Jules Duhaime.

He is survived by his brother, Andre’ Duhaime.

Father Duhaime attended Salette Minor Seminary in Enfield, N.H., and St. Mary Queen of the Clergy Seminary in Quebec, Canada. He also attended St. Francis Seminary in Loretto, Pa., and St. Mary’s Seminary in Baltimore. Father Duhaime was ordained to the priesthood by Bishop Joseph H. Hodges at the Cathedral of St. Joseph in Wheeling, W.Va., on May 29, 1971. From 1971 to 1973, he was associate pastor of St. Peter the Fisherman Parish in Fairmont, W.Va. He then served as associate pastor at St. Francis de Sales Parish in Beckley, W.Va., from 1973 to 1975 and at St. Paul Parish in Weirton, W.Va., in 1975. In 1974, he was appointed as chaplain of the veterans hospital. He served as pastor of Christ the King Parish in War, W.Va., from 1976 to 1978, Our Lady of Victory Parish in Gary, W.Va., from 1978 to 1986, and Sacred Heart Parish in Rainelle, W.Va., from 1986 to 1996. He also served as chaplain at the Federal Reformatory for Women in Alderson. In 1996, he became pastor of St. Patrick Parish in Hinton, W.Va., and St. Mary of the Greenbrier Mission in Alderson.

Father Duhaime retired from active ministry in 1998, but continued as chaplain at the Federal Reformatory for Women until 2015. In 2020, he moved to the Welty Home for Assisted Living in Wheeling. He celebrated his 50th anniversary of priesthood last year.

Mass of Christian Burial will be celebrated by Most Reverend Mark E. Brennan, Bishop of Wheeling-Charleston, at 10am on Friday, April 22, 2022, at the Bishop’s Chapel at Mount Calvary Cemetery in Wheeling. Visitation will be held from 9 a.m. until the time of the Mass. The burial will take place on Saturday, April 23, at 10am at Sacred Heart Cemetery in Springdale, WV.

I met Father John in Rainelle WV when he was the priest at Sacret Heart Church. I was Jewish at the time, but attended Church with my wife when we visited my Mother-in-law and Father in law. We struck up a friendship 1995. In 1998 he drove all the way to Burke, VA for the Easter Vigil to see me become Catholic. He sat with the other Priest with our church to make sure I would go through with it. Over the next 22 years we spoke on the phone, when we came to Rainelle I would visit his home and have long conversations. I especially enjoyed seeing his Christmas decorations and trees decorated in his home. He always had three to four decorated at one time. Our conversation and visits slowed down over the last several years, because of the passing of my wife’s family during the years. After contracting Cancer and doing battle for many years on and off with the disease I made a point to visit with him whenever we were in town. I think my favorite stories were about his visit to the woman’s prison and when he met Martha Stewart and heard her confession. He had me on the edge of my seat. I thought he was going to spell everything, but he didn’t. He just gave me that silly grin and open his eyes like it was the story of the century. Father stayed true to his convictions and took her confession to the grave. When I see him again, Maybe he will tell me then. I’ll miss you.

One of the sweetest priest in the world. He married my sister. He was there for my family always. He came to my sons graduation. He was a wonderful man. I am so sorry to hear this. I know I have not heard from him and his cards came back. God Bless I know you are in heaven

Father John performed our wedding 40 years ago this June at Our Lady of Victory Catholic Church in Gary, WV.My first job was at this church helping print church bulletins+ helping decorate church especially for Christmas. He loved to decorate+ made the church area so beautiful! He loved watching fake wrestling+ also had a pet bird that he sang + talked to. I will cherish the good memories of him. He is now resting in Peace among the angels☮️

John taught religion at Cathedral grade. I attended his ordination as an 8th grader. I remember him as a kind young man.