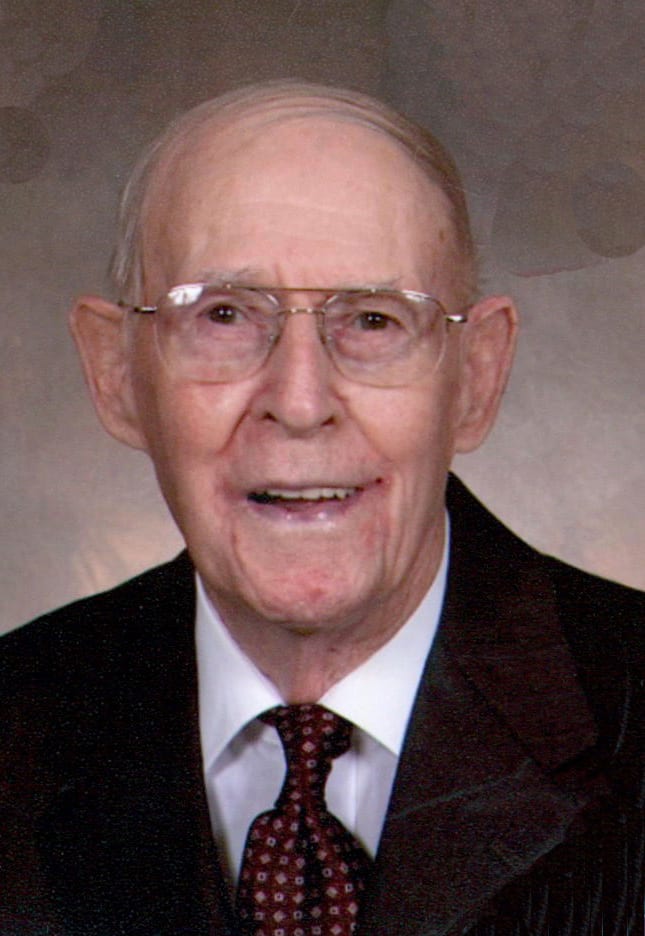 Fred H. Holmes, 95 of Moundsville, WV died Saturday, March 5, 2016 in Shadyside Care Center, Shadyside, OH.  He was born August 4, 1920 in Marshall County, a son of the late Louis E. and Tisha (Blake) Holmes.  He was retired from the former Louis Marx Toy Company, a member of the First Christian Church, Moundsville and a US Army Veteran of WWII.  In addition to his parents he was preceded in death by a brother, Ward Holmes; two sisters, Eula Holmes and Freda Gatts.  Surviving are his beloved wife of 68 years, Norma Jean (Gatts) Holmes; three daughters, Janet Sue (Joe) Church of Moundsville, Kathy (Denny) Philipps of Glen Dale, Sonja (William “B.J.”) Widmer of Wheeling and a brother, Dale Trenter of North Carolina; five grandchildren, Kimberly (Jeff) Dougherty of Moundsville, Stephen (Lynsie) Philipps of Moundsville, Rebecca L. Philipps of Alexandria, VA, Anthony William Widmer of Temple, TX and Fred L. Widmer of Wheeling; three great grandchildren, Payton, Averey and Emersyn and several nieces and nephews. Fred loved to fish, hunt and enjoyed woodworking.  Friends will be received from 2:00-4:00 and 6:00-8:00 pm Tuesday at Altmeyer Funeral Home, 118 Grant Avenue, Moundsville where services will be held at 11:00 am, Wednesday, March 9, 2016 with Rev. Wesley Howsare officiating. Entombment in Riverview Cemetery Mausoleum, Moundsville where the Moundsville Veterans Honor Guard will conduct military services. The family would like to give a special thanks to all the dedicated caregivers at home and at the Shadyside Care Center.  Memorial contributions may be made to the First Christian Church, 1200 3rd Street, Moundsville c/o www.tmcfunding.com. Online condolences may be sent to the family at www.altmeyerfuneralhomes.com

Kathy and Denny,
We are so sorry for your loss. We always loved hearing you tell stories of your father. He sounded like a wonderful man, husband and father. He was a lucky man to always have you there for him. All our love and prayers.

Sorry for the loss of your husband, father, and grandfather. From neighbors of Sonya and BJ Widmer

Norma, Kathy & family,
So sorry for the loss of your wonderful husband & father. He will be kindly remembered by all who knew him. May your faith give you comfort, hope & peace. God be with you all. “Earth has no sorrow that heaven cannot heal.” Patty Wylie

My sincere condolences to the Holmes family. May your memories bring you comfort in the days and weeks ahead and have faith in God’s promise found at Psalms 34:18. My deepest sympathy to you all.

We are so very sorry for your loss. Uncle Fred was one of my favorites and a truly good person. We may not see each other often, but Aunt Norma Jean and my cousins are special and my prayers are with you and your families. Even though we are not in town to pay our respects in person, I’ll be thinking about you. Prayers and hugs.

May your memories of Fred H. Holmes, give you peace, comfort and strength…