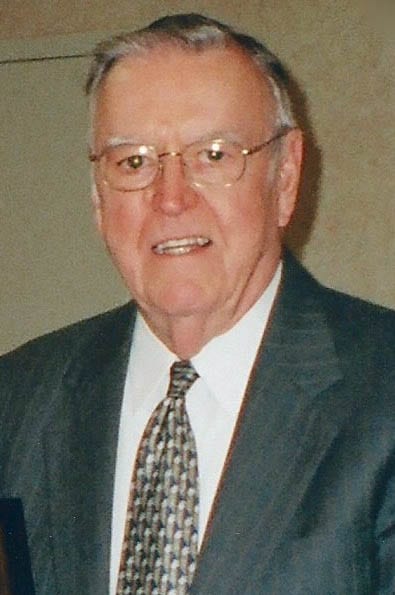 George G. Griffith, 94, formerly of Weirton, returned peacefully home to our Lord Monday, May 3, 2021 at the Kitty Askins Hospice Center in Goldsboro, NC, surrounded by his children.  Born December 7, 1926 on the family farm in Triadelphia, WV, George was the son of the late James P. and Mary F. Ebbert Griffith. He was preceded in death by siblings, James, Charles, John, Vincent, Mary Margaret Griffith, Loretta Ann
McQuay, his beloved wife Rita, and great-grandson Vincent Nguyen.  George was a WWII veteran, having served in the U.S. Navy with the Seabees (Construction Battalion) in the South Pacific. He retired in 1992 from Bell Atlantic with 42 years of service, served in the West Virginia Legislature from 1964-70, and the Advisory Board of WV Northern Community College from 1972-81. His many affiliations included his proud participation in the D.P. Murphy Council Knights of Columbus Fourth Degree Assembly, Weirton Lions Club, VFW Post   No. 2701, Williams Country Club, and the St. Paul’s Holy Name Society. He was a devout member of St. Paul’s Catholic Church for over 50 years and dearly loved his Weirton community before his move to NC.  Surviving is his brother Thomas Griffith of Wheeling, son Geoffrey (Rosemary) Griffith of Haymarket, VA, his three daughters Christine Liming of Baltimore, MD, Patricia (Warren) Childers of Goldsboro, NC, Amy Griffith of Clayton, NC and grandchildren Katherine Griffith, Maggie Liming, Zackary and Paige Childers, Sarah Childers Sapp, Kyle and Jillian Bricker, and many nieces and nephews.  A Mass of Christian Burial will be celebrated Friday May 14, 2021, 11 a.m. at Our Lady of Seven Dolors Catholic Church, Chapel Hill Rd., Triadelphia, WV. with Msgr. Paul Hudock officiating.  Interment will follow at Our Lady of Seven Dolors Cemetery.  George’s final wish was that his children remain close and that his final resting place be next to Rita, his beloved wife of 67 years.  Memorial contributions may be made to St. Paul Catholic Church, 140 Walnut  St., Weirton, WV 26062.

From your telephone company family we want you to know he was a delight to work with and a joy to know.
May he be at peace and forever at rest with Rita.

May your memories of George G. Griffith, give you peace, comfort and strength…

Tom& Family. I’m sorry to learn of George’s passing. Spent alot of time with him while he was visiting Chuck during his sickness…Enjoyed the conversations between you brothers. You all sure did know how to make a caregiver feel welcomed by your family even tho I’ve known most of you for years. God Bless you all & May George rest in Peace with his eternal family….