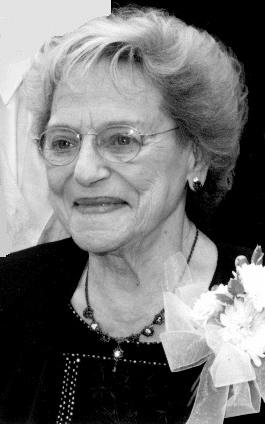 Our hearts are broken as we mourn the loss of our wonderful mother, grandmother and great grandmother.

Grace was 97 years old and born on September 17, 1919 in Bridgeport, Ohio. Her parents were Elwood James and Emma Laubmeister Coss and she was one of nine children. Her siblings are all deceased.

She married Clarence F. Neidert at Selfridge Army Air base in 1944 where Clarence was serving in the Army Air Corps. After the war, Grace and Clarence operated Neidert’s Grocery on Lind Street in East Wheeling. Clarence died in 1980 but she continued operating the store until 1990.

She was a longtime member of St. Vincent de Paul church and very active in supporting St. Vincent school when her children were students there. Grace served as president of the PTA and remained active in civic and religious organizations, even in her later life.

Our mother was a remarkable person and we were blessed by her love and devotion to her family. Her passion for living and her deep faith in God were constants throughout her life. She was kind and caring to everyone she met. If you needed someone to talk with, she would listen. If you needed advice, she would give it. She treated everyone with honesty and respect.

Friends will be received from 2-4 and 6-8 p.m., Friday, at Altmeyer Funeral Home, Elm Grove Chapel, 154 Kruger Street, Wheeling. Mass of Christian Burial will be celebrated at 10 am, Saturday, July 29, 2017, at St. Vincent de Paul Church, with Msgr. Eugene Ostrowski as celebrant. Interment will follow in Mount Calvary Cemetery, Wheeling.

Memorial contributions in Grace’s name can be made to St. Vincent de Paul Church, 2244 Marshall Avenue, Wheeling, WV 26003, or online at www.TMCfunding.com. Online condolences may be offered to the family at www.altmeyerfuneralhomes.com.

Dear Gary and Lois and Family,
We remember your mom from when we first moved to Kalamazoo. We know that she was a loving mother , grandmother and great grandmother who treasured her family above all else. I know she will continue to be a blessing to you throughout your lives.
Our thoughts and prayers are with you all. Love Fran , Jeff, Melissa, Michael and Sara

Luann and Jacob, I’m so sorry for your loss. I heard how wonderful she was and how close you were. You’re in my thoughts and prayers.

Faith and family were the bedrock of mom’s life.

Gary and Lois, we are so saddened by the loss of your mother. May she Rest In Peace and may you also find peace as you celebrate her life.

Gary and Lois, so sorry for your loss. Mothers are very special… you are in my thoughts and prayers…

Luann – so sorry to hear about your mom. She was a wonderful woman. I enjoyed the time I spent with her. Sending PRAYERS to you and your family.

To Gary and Lois:
So sorry for your loss. Your family is in our prayers.

So sorry to read of Mrs. Neidert’s passing. I remember going to her store when visiting my grandparents on Cherry St. She was always kind to the children when they came into the store. They made it easy for my grandparents by delivering groceries. May she rest in peace.

Grace was a lovely lady who was always kind. I grew up down the steps from their store, and got to see her and Clarence almost every day throughout my childhood. My heart goes out to your family. One thing is certain, however: those who preceded her to Heaven are welcoming her with open arms, and she will always be with all of you.