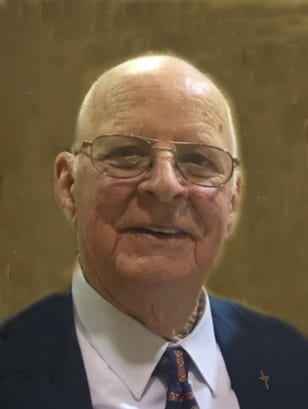 He was born January 31, 1929 in New Martinsville, WV, a son of the late Nicholas and Mary Nolte Miller.

Hilary was a retired employee of Mobay Chemical Company, a member of St. Joseph Catholic Church, St. Joseph Settlement, and a veteran of the United States Army.

In addition to her parents, he was preceded in death by his wife, Frances R. Miller; infant sons, David and Anthony Miller; a sister, Wilma Klug; and a brother, Julian Miller.

Interment will be in St. Joseph’s Cemetery, St. Joseph Settlement.

Memorial contributions may be made to St. Joseph’s Catholic Church or the Marshall County Animal Shelter c/o TMCfunding.com.

Remembered your dad as someone who worked very hard for the community and church’ also heard he was a very good cook. Enjoyed the video of your family with dad especially the picture of him and your mom. So sorry for your loss but it’s comforting to know he’s together again with your mom.

Mary, Mark, Matt and Meg,
We wanted you to know that you and your families are in our thoughts and prayers. We are praying that God will give you the comfort that only He can. We loved Hilary very much and really enjoyed our stay with him during the family reunion. He will be greatly missed. We love you all.

A decent honorable man. We met him a few times but instantly liked him. Meg, we are so sorry for your loss. Our prayers for you and your family.

May the love of God comfort you and your family during this time. We were so sorry to hear of your loss, and send Our Deepest Sympathy. Gods Blessings, Beverly and Mark Wilson

Kate, so sorry for your loss ! May your Dad rest in peace. My heart goes out to you & your family . Prayers to all Barb Palmer

Stephen and Kimberly Starcovic and family

We are so sorry for your loss. St. Joes just won’t be the same without him. We enjoyed his company so much. We love him and his family. God Bless you, yours and your works.

Meg, we are so very sorry for your loss!

Matthew 5:4 “Blessed are those who mourn, for they will be comforted.”

Please accept our sympathy and prayers. May your family know the peace of Christ in these times of great sorrow. We always will have the fondest memories of Hilary who was like a father to all his childrens friends. May he rest in peace with joy and love.

So sorry for your loss. Hilary was a good man and I always thought of him as more of an uncle than of a cousin. I have a lot of fond memories, from the beach trips to the times spent at his house growing up. You are all in our thoughts and prayers.