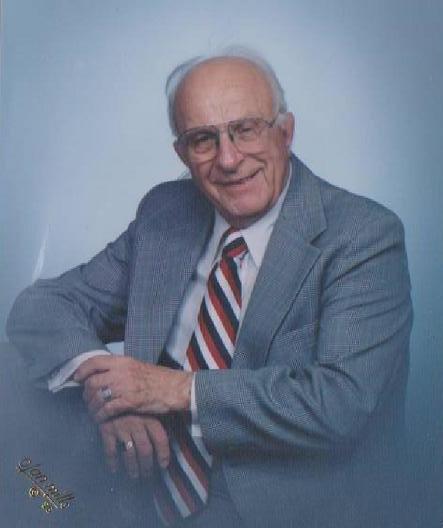 He was born September 21, 1922, a son of the late Irvin W. and Edna (Nest) Ruckh. Irvin was a US Army, WWII Veteran, and later worked as an accountant and office manager at Hundley Motor Company for 32 years, and then moved on to retired from the post office in 1991. He was a member of St. Joseph’s Cathedral and served his community through many clubs and organizations such as; Past Faithful Navigator of Carol Assembly 504, Past Deputy Grand Knight of Carol Council 504, Finance Officer of American Legion Post #1, past President Guild of St. Paul, past President of Legion of May, President Holy Name Society of Cathedral and past Treasurer of the Confraternity of Christian Doctrine. Irvin was a member of the Band Booster clubs for both Wheeling Park and Central High Schools. He loved to travel and be with his family.

In addition to his parents, he is preceded in death by his loving wife, Martha Ruckh (1987); one son, Irvin L. Ruckh; one grandson, Roger Louis Friery (2006); and one sister, Marian Robbins.

Family and friends will be received Thursday, February 11, 2016 and Friday, February 12 from 2-4 & 6-8 pm, at Altmeyer Funeral Homes, 1400 Eoff St., where a rosary service will be held, Friday at 7:30 pm. A mass of Christian burial will be held Saturday, February 13, 2016 at St. Joseph’s Cathedral at 1 pm, with Monsignor Kevin Quirk as celebrant. Entombment will take place at Mt. Calvary, Wheeling.

Memorial contributions may be made to The Seeing Hand Association in C/O www.tmcfunding.com

My Dad was a very thoughtful and kind man. He took me everywhere he went. Such as working late at Hungley Motors. My Dad was the best. He took me to my cheerleading basketball games. Whatever I had to do. He was there fo r all of us esp after my Mom passed away. Je was a friend to me. He guided me and he loved my 3 boys as if they were his. I thank you Dad and you will never be forgotten. You will live in my heart forever. I love you soo very and now at peace.

The impact you’ve had on my life is immeasurable by any standard or means, Grand Pap. You were more than a grandfather to me, you were my father. You were always there when I needed guidance, or just someone to talk to. To say that you were the greatest granddad I could have ever hoped for in my life is not enough. There are not words enough to describe how much you will always mean to me. It is with a heavy heart that I’m saying farewell, but it will never be good bye. I love you with my whole heart and I always will!

To the family of Irvin Ruckh, I would like to express my deepest and heartfelt condolendes to you. I am truly sorry for the lost that you are feeling. When ever we loss such a caring and loving person, it is the hardest experience that a family can go thru. And because of this my thoughts and prayers are with your family. During this extremely difficult time, turn to Jehovah God for much needed comfort. He will give you the strength needed, in order to help you to endure. (2 Cor. 1:3,4) Something else that can bring your family comfort is cherishing the wonderful memories that you have of Mr. Irvin. These precious memories will console the family in the day’s ahead.

I was so sorry to read of Irvin’s passing. I grew up knowing his name. My father, Jack Coleman, who passed away in 2011, worked with Irvin at Hundley Ford. I see they were both born the same year. I know Irvin was very hard working and was a good friend to all who worked at Hundley’s. I am sorry for your loss.

I am sorry for your loss. I will be keeping your family in my thoughts and prayers.

As a little girl, I remembered every holiday filled with laughter. He always worked so hard & was devoted to his faith. Then, we lost my grandmother & he stepped in to raise a 13 year old girl by himself. Running out in the middle of the night for hairspray, tolerating my music, and becoming my grandpap/ dad/ mom all in one. He never had a mean word to say about anyone & always spoke softly. He was in some ways my best friend. I will always love him………

I can remember my Uncle June coming home from work late when we lived on Lind Street. He immediately would sit quietly on the couch while the family gathered around him. Buddy was pulling his ear and Carol June was on the other side. This was before Tracy being born. I loved going to their home on any given day and always met with great reception. You shall be missed by all and once again you shall be with the love of your life, Aunt Martha. Rest in peace and prayers to the family. Love Chrissy, Michael and Logan Gary

May your memories of Irvin L. Ruckh, give you peace, comfort and strength…