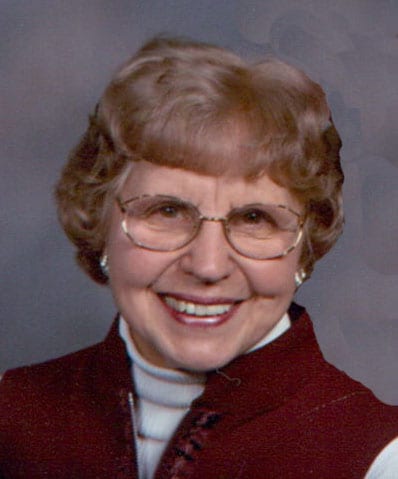 She was born December 13, 1930, a daughter of the late William and Mildred (Schnelle) Kindelberger. She was a member of Hope United Methodist Church, where she taught Sunday school, Vacation Bible School, acted as Treasurer and played the organ for 40 years. She was a Wheeling High School Graduate (1948). Joann worked for Air Reduction and L.S. Good, and later worked as a secretary at Bethlehem Grade School from 1963-1992. She loved gardening, bird watching, cross country skiing, picking black raspberries, canning and baking the best pies on the planet. Above all, Joann enjoyed taking care of and speaking into the lives of her grandchildren.

In addition to her parents, she is preceded in death by her two sisters, Arlene Staub and Sandra Kohutek.

Family and friends will be received Friday, April 8, 2016 from 2-4 & 6-8 pm at Altmeyer Funeral Home, Elm Grove Chapel, 154 Kruger Street, where services will be held Saturday, April 9, at 11 am with Pastor Barry Bullman officiating. Interment will take place at Greenwood Cemetery.

Memorial contributions may be made to Hope United Methodist Church or to the American Cancer Society in C/O www.treasuredmemoriesfunding.com

My sincerest sympathy to all of you. You certainly had the best, the dearest, the sweetest in Aunt Joann. Memories of time spent at the farm with your fun, devoted and loving family will always be among my most precious memories.
Love and prayers, Carolyn

Terry, just heard of your Mom’s passing please accept my deepest sympathy for you and your family’s loss and my God always be with you.

Dear Keith , Terry and families, We are so sorry to hear of your mom’s passing. ( I have fond memories of your mom from Bethlehem Grade School) Your family is special and always generous and kind. Sincere sympathies, Craig and Susan(Clark)Eddy, and Dorothy Clark

So very sorry to hear of Joann’s passing. She was a sweet and kind woman and I have such fond memories of her. My prayers and condolences to all the family.

So sad to lose such a beautiful, gracious, generous and sweet lady. Aunt Joann will be deeply missed here on earth, but oh my, how she will shine in heaven!

Truly a special, special lady – my deepest sympathy to Chuck and family.

Love to your family.
When Ronnie and I lived in the little house, you both took us under your wing. That we are thankful for. But my greatest memories are when I would be looking for Derek and Cassidy outside when I thought they were playing in yard. Well they would be in with Joann. She was giving them a snack or just talking to her.
She was special lady. An angel then, an angel now.

Chuck and family, we are very sorry to hear of Joann’s passing. What a true and faithful Christian she always was. She will be missed by so many. Prayers for comfort to all.

So sorry for the loss of Joann. We worked the food pantry with her at the church. Sending prayers for comfort and strength to the family.

Chuck sorry to hear of Joann passing thoughts and prayers are with you.