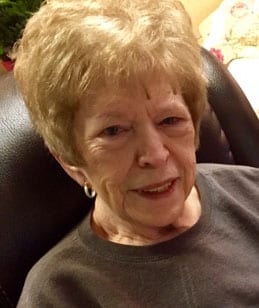 She was born March 8, 1937, in Wheeling, a daughter of the late Robert L. and Clara Mae (Palmer) McKee. She was Catholic by faith. She was a loving wife, mother, and grandmother who enjoyed traveling with her family. She loved Notre Dame, the Dallas Cowboys, decorating for Christmas, and shopping.

In addition to her parents, she was preceded in death by her husband, Richard E. “Zip” Zandron Sr., and one grandson, Jason Guthrie.

JoAnn’s family would like to extend a special thanks to the staff of the Good Shepherd Nursing Home for the wonderful care and kindness JoAnn received.

Friends will be received on Thursday, September 15, 2016 from 3-8 pm at the Altmeyer Funeral Home, 1400 Eoff Street, Wheeling, where funeral services will be held on Friday, September 16, 2016 at 10 am with Rev. John Beckley officiating. Interment will follow in Greenwood Cemetery.

Online condolences may be expressed to the family at www.altmeyerfuneralhome.com

Sorry to hear about your mother.

Rick & Mary – Our deepest sympathy to you and your family. Much love from Joe, Cindy, Sean, Christa & Erin.

Rick and Mary – Qe are so sad to hear of the death of Rick’s Mom. Please know we are sending love and good thoughts your way.

Dearest Rick and Mary and the Zandron family,

We are so sorry to hear of the loss of your mother and we are sorry we can’t be there with you. Please know our thoughts, love and prayers are with you.

When visiting Joanne at Good Shepherd , I was touched by the care shown to her by her family . The beautiful family quilt and the monthly themed window decorations all done so lovingly . She was quiet , elegant , sweet and sentimental and reminded me of my own mother who passed recently. Now that she has earned her wings I’m sure she is watching over all her loved ones. The last window “Angel Theme” was so fitting. May The Peace of The Lord be with Joanne and all who loved her.

Our hearts go out to you and your family at this difficult time.
So sorry for your loss

Thoughts and prayers for the family

I’m so sorry for your loss. Sending lots of love and prayers to the family.

Sorry for your loss. Sending prayers.