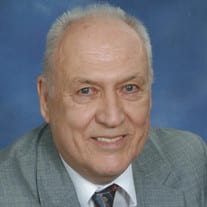 Mr. Metzger was born in Wheeling, West Virginia, and moved to Eustis in 1981, from Cambridge, Ohio. He was Catholic and a retired insurance agent.

He is survived by his sons; John B. Metzger Jr. of Melbourne, Florida and Michael Metzger of Longwood, Florida, his grandchildren; Natalie Milic and John B. Metzger, III, and his great-grandson, Jovan Milic. He was preceded in death by his parents, John E. and Josephine Metzger; and his daughter, Darlene K. Metzger. John is also survived by his former wife Nancy Haney of Melbourne.

Services and interment will be private. Arrangements by Altmeyer Funeral Home, Wheeling. Online condolences may be offered to the family at www.altmeyerfuneralhomes.com