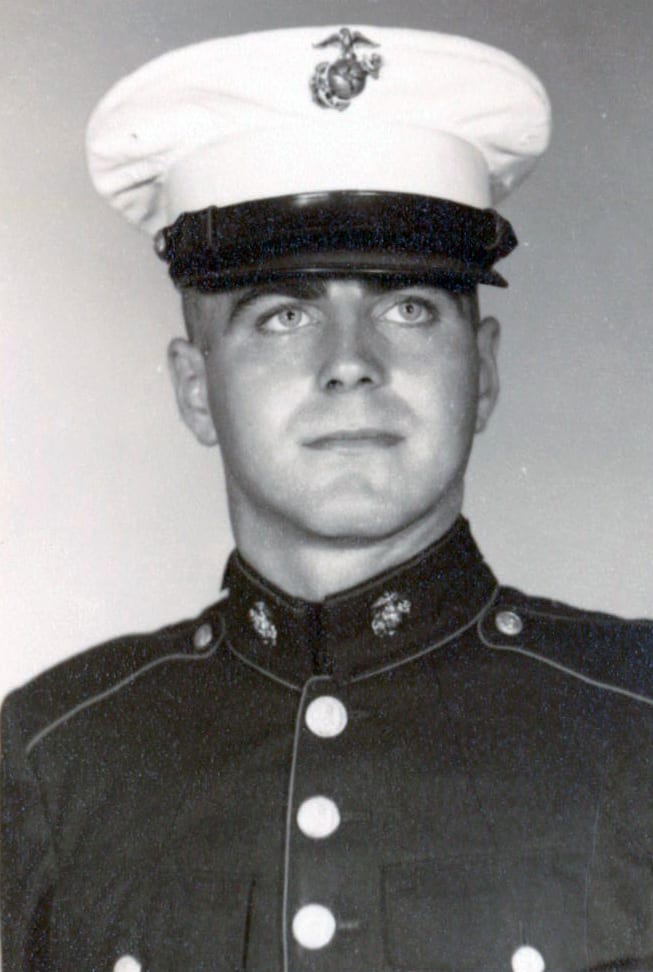 MARPLE, John H., 75, of Wheeling, W.Va. died Saturday, August 8, 2015 at home surrounded by his family.
He was born December 10, 1939, in Wheeling, a son of the late Roy and Savella (Henry) Marple. He was retired from Wheeling-Pittsburgh Steel, Martins Ferry, Ohio plant and the past owner of VAPCO Inc. in Wheeling. He was a member of St. Vincent de Paul Catholic Church in Elm Grove and a United States Marine Corp veteran.
In addition to his parents, he was preceded in death by his daughter, Robin Sue Marple, one brother, William Marple, and one niece, JoAnn.
He is survived by his loving wife, Sue (Kuntz) Marple; three children, Jeff (Barb) Marple of Wheeling, Jill (Brian) Saner of Wheeling, and Lori (Bill) Buchanan of Wheeling; one sister, Jane (Clyde) Shook of Wheeling; one sister-in-law, Sally Marple of Wheeling; four grandchildren, Rebecca Marple, Riley Saner, Liam Buchanan, and Logan Buchanan; four great grandchildren, Arriyah, Elizabeth, Ahnikah, and Nolan; and several nieces and nephews.
John H. Marple was a true gentleman. He was everyone’s neighbor and friend. His smile and kind handshake were always ready. He was an extraordinary husband, father, and Pappy. He will be forever in our hearts.
Friends will be received on Monday, August 10, 2014 from 2-4 & 6-8 pm at the Altmeyer Funeral Home, Elm Grove Chapel, 154 Kruger Street, Wheeling, where a vigil service will be held at 3:30 pm. Mass of Christian Burial will be celebrated on Tuesday, August 11, 2015 at 10 am at St. Vincent de Paul Catholic Church in Wheeling with Rev. Gary Naegele as celebrant. Interment in Mount Calvary Cemetery, Wheeling. There will be a funeral luncheon following at the St. Vincent de Paul Marist Center in Elm Grove.
Online condolences may be expressed to the family at www.altmeyer.com <http://www.altmeyer.com>

He was always pleasant and brought a smile to my face. I will miss him. So sorry for your loss!

May the love of God surround you and your family during this difficult time May you come to know that the love of God is with you always, May your memories of John H. Marple, give you peace, comfort and strength… Rest now in the arms of our Lord your work on earth is complete. I thank you for your service and my Freedom. You will not be forgotten. My thoughts and prayers are with the family of….. US Marine Veteran, John H. Marple, “A True American Hero” God Bless†

7 years ago Mr Marple was first one to wish Mara a great first day at school .He was a great neighbor and a wonderful man We will miss you so much

Sue & Family-
May the memories of John ease your loss. Mr Marple will forever be a fond memory of my childhood and neighborhood. All of you are in our thoughts!

SO SORRY FOR YOUR LOSS. WE WERE RELATED WITH OUR PARENTS BEING COUSINS. LIVING ON THE HILL IN ELM GROVE HEIGHTS GROWING UP. PRAYERS FOR THE FAMILY

We are sad for your loss. John was the best neighbor and friend.
Scott and Suzanne Rose

Sue and family, my sincere condolences to all of you. I will keep you in my thoughts and prayers.