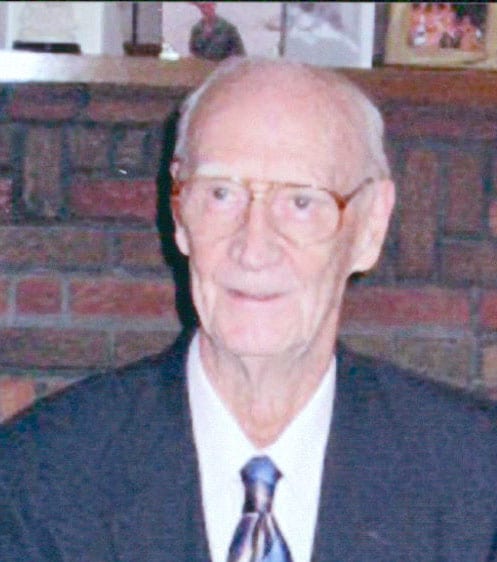 Bob was born December 28, 1922, in Bellaire, Ohio, son of the late John J. and Margaret Ney O’Shaughnessy. He was a member of St. Alphonsus Catholic Church, Wheeling; and was a highly decorated U.S. Army Air Corp veteran, having served as a B-26 Pilot during World War II.

Bob coached football at Blessed Trinity School for numerous years. He is referred to as “Coach” even today. He taught generations of family and neighbors to swim, water ski and ice skate. He was a devoted husband, father, grandfather, great-grandfather, uncle and great uncle. He was always ready for an adventure and a creative project.

In addition to his parents, he was preceded in death by his beloved wife of 65 years, Virginia L. James O’Shaughnessy, in 2011: and two sons, Patrick J. O’Shaughnessy and Michael A. O’Shaughnessy.

Memorial contributions may be made to the Hydrocephalus Association, 4340 East West Highway, #905, Bethesda, MD 20814, or Lazarus House, 95 E. 11th St., Wheeling, WV 26003. Contributions may also be made online at www.treasuredmemoriesfunding.com.

We are so sorry to hear about your father. He was a great man that we looked up to, respected and admired.

dear kitty, tim and sallie our family was so sorry to hear of your loss. your dad was a wonderful, kind man with a great sense of humor. our thoughts and prayers are with you and your families. another GREAT IRISHMAN is resting in God’s loving arms. the driscolls-joanne, tim, sheila, brenda, kelly and erin driscoll

Shaunie was one great guy – one of the finest men I ever knew.
We, day in and day out , while at Central, vied for the “end” position on the football team. What a competitor. (and he generally won out). We have since those early days remained the best of friends and it was always a privilege for me to call him “my friend”

What a blessing to have know your Dad. We are so sorry to here of his passing.

To The O’Shaghnessy Family, your family is in my thoughts and prayers today. The video tribute was a wonderful tribute to a wonderful man. The great memories will live on in his family forever! Your mother, brothers, and father will watch over forever.

Kitty, Tim, Sally, please accept my sincere and heartfelt condolences on the passing of your father, John J. O’Shaughnessy Jr. People on Wheeling Island remember him for his kind and soft-spoken ways. They remember him as “Coach” and as a wonderful neighbor. He was also an American Patriot who served his country heroically in World War 2. My Uncle Bob was also a tremendous athlete. I remember him playing full court basketball when he was in his 40’s against young men half his age at the YMCA. (and he made it look easy). I know of multiple times when John O’Shaughnessy Jr. reached into his wallet and financially helped out perfect strangers, who were obviously “down on their luck”. A devoted Christian, the man simply had a great heart. Uncle Bob and his beautiful wife, my Aunt Ginny, always had kind and nurturing words for the many Island kids that would stop over at their home. They were a wonderful couple, full of character, integrity, and love. And now they are re-united, along with their sons, Pat and Mike, in heaven. All, whose lives they touched, are richer for the experience.

many fond memories from the old downtown YMCA, he will be missed

We are sending our sincere condolences to the entire O’Shaughnessy family. Mr. O was truly a blessing to all of us. Rest in peace “Coach”.

My heart is saddened to learn of Mr.O’Shaughnessy’s passing. My sympathies for his family. He was such a great, fun loving, hard working, kind man who always had time for everyone. Memories of him will live forever, bringing a big smile to your face and a tug at your heart for someone so dear!

Mr. O was full of life. My Grandparents, and parents lived across the alley. He was always such a nice man. I remember him most in his later years when my Dad and brothers were building late model stock cars. Bob would wander over, hoping that they would fire one of them up. They would do it just for him. And his face would light up like he was 7-years-old again. Now, those moments are priceless. I am glad that I was there to witness it. The man was a hero, yet the little things in life brought him joy. May he rest in eternal peace.