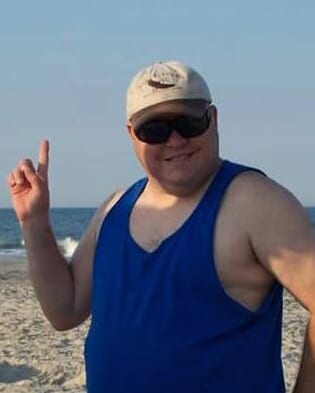 He was born April 27, 1964, a son of the late Dominick and Mary (Druschel) Fragale. John loved telling people jokes and stories, as well as fishing, cooking and above all taking care of his family.

In addition to his parents, he is preceded in death by one sister, Sharon Shedore (2007)

Family and friends will be received for a memorial gathering, Monday, December 21, 2015 at the Altmeyer Funeral Home, Elm Grove Chapel, 154 Kruger St., from 2 pm until time of service at 6 pm, with Pastor Ron Williams as celebrant.

Memorial contributions may be made to Juvenile Diabetes Research Fund in C/O www.tmcfunding.com or to JDRF, 26 Broadway, 14th Floor New York, NY 10004.

Beth and Michael, I am sorry we have lost touch but sometimes life takes us on different paths. I remember John sitting in the pew on rehearsal night of our wedding laughing uncontrollably with our family. I am certain everyday he laughed and smiled and enjoyed life to the fullest. God Bless

Dear Mikey,
My heart goes out to you pal. You and your family are in my thoughts and prayers.
“Blessed are those who mourn, for they shall be comforted…” -Matthew 5:4
I hope peace and comfort finds you my friend.
With Love,
Lee

To all of John’s family and friends, My most sincere condolences on the passing of your dear husband, father, brother and friend. My thoughts and prayers are with you all at this very difficult time. My God bring you the solace and comfort that only He can.

Beth and Michael, I am so sorry for your loss. John was always such a fun and friendly person. I am sure he will be sorely missed by everyone who knew and loved him. Sending love and prayers your way.

So sorry for your loss beth and your family. Its been a very long time since we have seen you and john. But I can still see you both.

Remembering John at abi birthday party. A very nice man. So sorry for your loss.

So sorry for your loss. My prayers are with you. I really liked John , a very nice man.

Mike, & Beth, I am so sorry for your loss. I Met you all when my son Dylan started Scouts. We had the fundraiser over at the KidUcation building, with Janelle Loh. John was such a fun guy to be around.

Beth, Mikey, Jill and family, so sorry for your loss. I know John from coming to shop where I work. He was always the comedian. Always made you laugh. He will be missed. You and your family are in our prayers.

I first met John when I worked in town . A super nice guy . Always spoke, friendly smile. John will be missed RIP