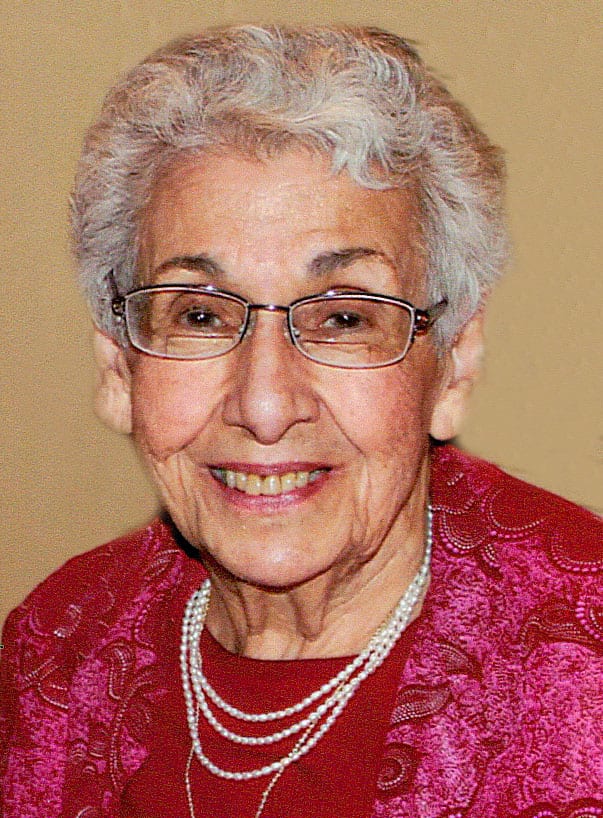 She was born March 21, 1925, a daughter of the late George and Mary George Elias.

Josephine was a devout Catholic and was a member of Corpus Christi Church in Warwood. She volunteered her time with a variety of causes, including Catholic Charities and WV Right to Life.

In addition to her parents, she was preceded in death by her husband, Alvin F. Weidman in 2017, three sisters, Bessie Martin, Ann Elias, Madeline Genovese, and two brothers, Louis and Joseph Elias.

Friends will be received on Sunday, January 20, 2019 from 4-8 pm at the Altmeyer Funeral Home, Elm Grove Chapel, 154 Kruger Street, Elm Grove, where a rosary service will be held at 6 pm. Mass of Christian Burial will be celebrated on Monday, January 21, 2019 at 11 am at Corpus Christi Catholic Church in Warwood, W.Va., with Rev. Paul Mundumoozhikkaranirappel, C.S.T. as celebrant, and Msgr. Eugene Ostrowski V.F. and Msgr. Bakhos Chidiak as cocelebrants. Entombment will take place in Mount Calvary Cemetery, Wheeling.

In lieu of flowers, memorial contributions can be made to Catholic Charities (click here), 2000 Main Street, Wheeling WV 26003 or to West Virginians for Life (click here), 25 Canyon Road, Morgantown, WV 26508, or through www.tmcfunding.com

I am so sorry to hear about your Mom. What a wonderful lady! I always enjoyed spending time at your house with the girls. She always had a smile on her face and was always gracious to us kids coming over to play. Loved her!

I’m sorry for the late condolence. Prayers for Anne and her family

We loved your Mom. She was a great lady. We were so sad to hear of her passing.
God just wanted her to brighten heaven.

We had wonderful memories as neighbors and friends in Warwood. So sorry for the loss of your Mom. Our thoughts, love and prayers are with all of you.

Our thoughts and prayers are with the Weidman family. Your mom was so kind and made everyone feel special. She was a beautiful person and is now a beautiful angel. May God be with you during this time and may all the wonderful memories console you. Love & prayers, Rita Bosold & family

To all of the Weidmans: I am so sorry to hear of the loss of your mother. She was such a sweet and kind soul, and a stunning example of faith and dedication. My thought & prayers are with you all – Your old neighbor, Cathy (Sengewalt) Schumacher

We are so sorry for your loss. Our thoughts and prayers are with all of you.

My deepest sympathy to the entire Weidman family, especially those I was lucky to know—Al, Anne, Judy, Joe, and Vicki. Your wonderful Mother has seen the Face of God and is happily reunited with your Dad. They will save even more babies now. May both your Dad and Mom Rest In Peace.

You are in our Thoughts and prayers as you lay Mom to rest
beside Dad. They were Wonderful and Beautiful examples to us at Corpus Christi and in the Community in their respect for the unborn and devotion to Our Lady of Fatima. Regret we are away from Wheeling but send our prayers for Your Consolation.

Dear Chris, Eleanor and Weidman Family: May God be with you during this time. Your mom was such a beautiful soul and will be missed by many. May God wrap his loving arms around her and around your entire family. Kashelle Evans