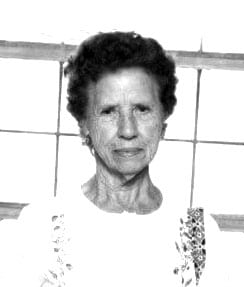 Katherine Marie Pearson, 90 of Wheeling, WV died Thursday, July 7, 2016 in Forrest Hills Nursing Home, St. Clairsville, OH.  She was born Sept. 19, 1925 in Bridgeport, OH, a daughter of the late Ray A. and Norma R. (Luckett) Stillwell.  She was a homemaker and Presbyterian by faith.  In addition by her parents she was preceded in death by her husband Glenn Pearson and 3 brothers, Ray, Alvin and Bruce Stillwell. Surviving are 2 daughters, Norma Benedett of Wheeling and Edna (Ronald) Thomas of Wheeling; 2 brothers, Bobby Stillwell of Moundsville, and Johnny Stillwell of Wheeling; 2 sisters, Joann (Dick) Bachman of Wheeling and Betty Parker of Wheeling; 5 Grandchildren; 8 Great-grandchildren and several nieces and nephews. Friends received Monday, July 11, 2016 from 10:00 am until time of service at 2:00 pm at the Altmeyer Funeral Home, Elm Grove Chapel, 154 Kruger St., Wheeling. Interment in Linwood Cemetery, Blaine, OH.  Online condolences may be expressed to the family at www.altmeyerfuneralhomes.com

In memory of my loving mother, Katherine. I will love you forever.

Rest in peace mom. I will keep you in my heart forever and I know you are with our lord and those family and friends who passed before you. I miss you so much and will never get over losing you. Love always, Poge.

i have been searching on the pc for a long time for your mother and Glenn and just found Kay. I am so sorry for your loss and mine. That was the last of my family and I am heartbroken. May GOD be with you.

When someone you love dies, the pain the family feels is very hard to bear. Sorry for you loss. The best friend that a bereaved family can have is our Creator, God. May you find comfort through prayer, to “the God and Father of our Lord Jesus Christ, the Father of tender mercies and the God of all comfort, who comforts us in all our trials.” (2 Corinthians 1:3, 4).

Norma so sorry to read about your Mom , what a long struggle , god bless u and your family, I have a lot of good memories of u , U will be in my prayers and my heart . also To Edna n family God be with u all love u and Poge

Norma so sorry to read about your Mom , what a long struggle , god bless u and your family, I have a lot of good memories of u , U will be in my prayers and my heart .

My Beautiful loving Mother…..Love you to the moon and back. Love Edna Kay