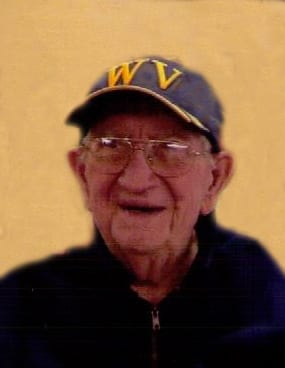 KLATT, Harold W., 91, of McMechen, W.Va. died Tuesday, October 13, 2015 at Heartland Lansing Nursing Home.
He was born October 25, 1923, in Warwood, W.Va., a son of the late Henry and Laura (Greene) Klatt. He was a member of the Church of God in McMechen, the Knights of Pythian Lodge 79 in Moundsville, W.Va., the Loyal Order of Moose in Moundsville, the Moundsville VFW, and the American Legion in McMechen. He retired from the Wildman Dental Laboratory.
Harold was an avid bowler. He loved hunting and fishing, and enjoyed visiting his cabin in Middlebourne, W.Va. He was a veteran of the U.S. Army. He trained as a dental technician who was stationed in Greenbrier, W.Va., where he treated many injured WWII veterans. He was so well known for his restorative dental skills that General Eisenhower traveled to visit Harold in Greenbrier to have his partial made.
In addition to his parents, he was preceded in death by two brothers, Robert Klatt and John Klatt, and three sisters, Geneva Frame, Jean Clegg, and Olga McGrew.
He is survived by his loving wife, Eileen (Hawkins) Klatt; one brother, James (Suzanne) Klatt of Martins Ferry, Ohio; sister-in-law, Darlyn Klatt of Warwood; brother-in-law, Jay Clegg of Warwood; and several nieces and nephews.
Friends will be received on Friday, October 16, 2015 from 10 am until time of funeral service at 1 pm at the Altmeyer Funeral Home, Benwood-McMechen Chapel, 214 Marshall Street, McMechen, W.Va., with Rev. Mitch Johnston officiating. Interment will follow at Halcyon Hills Memorial Gardens in Sherrard, W.Va.
Online condolences may be expressed to the family at www.altmeyer.com

Sending condolences. Harold’s roommate at Heartland. Sorry for your loss.

May your memories of Harold W. Klatt, give you peace, comfort and strength…

Eileen, and Family, Hadie will be missed. You both have always been so good to me. Hadie always took time to ask how I was doing in school. Hadie and Pap fishing, boating, and playing cards. I remember one July, Hadie, Pap, Jason, and I went out the run to seine for minnows. Instead we came back with turtles and had races. Thanks for the wonderful memories, you are in my thoughts.