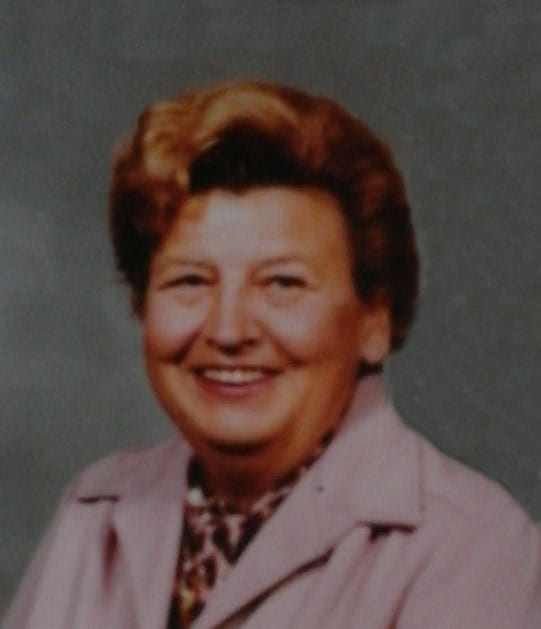 She was born July 27, 1917 in Wheeling, a daughter of the late Leonard and Rose (Levandoski) Sulek. Lillian attended St. Joseph’s Academy in Wheeling and was a long time member of Moundsville Country Club and Elm Grove Ladies Association.

In addition to her parents, she is preceded in death by her loving husband, John Vcelka (2003); two brothers, Alphonse and Lou Sulek; one sister, Olga Klinkoski, and a granddaughter Janine Vcelka Kennedy and a grandson.

Family and friends will be received Tuesday, December 6, 2016 from 6-8 pm at Altmeyer Funeral Home, Elm Grove Chapel, 154 Kruger St. A Mass of Christian burial will held Wednesday, December 7, at 11 am at St. Vincent de Paul Church. Interment will be at Mt. Calvary Cemetery.

Dear John, I was so sorry to hear about the loss of your mom. I just wanted to let you know that I am thinking of you and your family and will keep you in my thoughts and prayers as you go through this difficult time.

Linda, Buch & Suzie. So sorry to hear that Coicia Lillian died last Wednesday. Even though she had a long life, she will be missed. Lynn & I send our condolences to all of you.

Sending prayers and condolences to the family and friends in this time of need. I did not know Mrs. Vcelka but I worked with her husband John at the Ireland and McElroy Mines as I was a Foreman. R.I.P. and you are now in Heaven and with your husband again.

My sincere condolences to the Vcelka family. The death of a loved one can bring much tears and pain but may your hearts be filled with wonderful memories of times spent together. My deepest sympathy to you all.

Linda, Butch, and Suzie,
Was so sorry to read about the loss of your dear mother. You, and yours, are in my thoughts and prayers at this sad time.

Suzie, Linda, John: So sorry to read of the loss of your mother. I remember seeing her, in years past, when I was visiting my mother at Good Shepherd. Thoughts and prayers for your families.

Suzie, Linda, John: so sorry to read of the loss of your mother. I remember seeing her often, in years past, when I was visiting my mother at Good Shepherd. Our thoughts and prayers for you and your families.