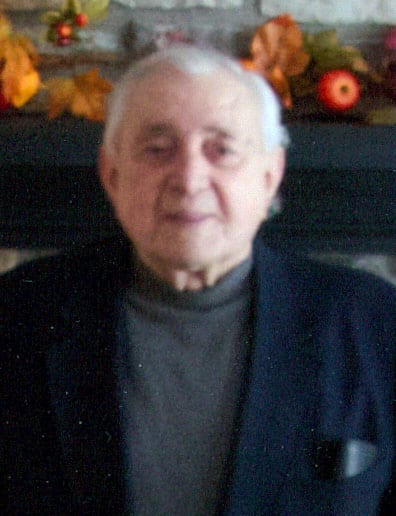 He was born on Dec. 10, 1927 in Wheeling the son of the late Louis and Mary Ann (Garbo) Anthony. He was a devoted Catholic and a member of St. Michael Parish Wheeling, a veteran of the U.S. Marines serving from 1946-1948. He was a 1946 graduate of Linsly Military Institute. Louis was Owner/Operator of Anthony’s Wholesale Produce which was established by his father in 1918 where he then retired in 1984. He was a 4th degree member of the Knights of Columbus, a member of Saints and Sinners, a member of the Moundsville Golf Club and the Moundsville Country Club.

In addition to his parents he was preceded in death by his oldest son, Mark Louis Anthony (2016) and brother, Samuel J. Anthony (2000).

Friends will be received on Saturday, August 26 from 10–11:30 am, with military services at 11:30 am, at the Altmeyer Funeral Home, 1400 Eoff St. Wheeling. Mass of Christian Burial will be celebrated at noon at the Cathedral of St. Joseph Wheeling with Msgr. Kevin Quirk as celebrant.

The family would like to thank his special caregiver, Eliane Valadon, as well as Valley Hospice for the care and support they provided.

Condolences may be offered to the family at www.altmeyerfuneralhome.com.

We were saddened to hear of Lou’s passing. I have great memories of our roundtable lunches and his sense of humor. Our thoughts and prayers are with the Anthony family.

Sending lots of love and prayers to the Anthony Family! My favorite memory of Lou…I will never forget my first visit to Wheeling…we stopped at Primantis Deli to eat and to pick up sandwiches for Lou…when we arrived Lou sate down at the dinner table and shouted out my name for me to come in the room and sit down with him. As he proceeded to eat his sandwich he told me stories of his younger days when he would two of them without a problem. So, he really made me feel welcomed…he reminded me of my dad…my dad loved to eat and was always calling /shouting out one of four daughters names for something….I hope Lou and my dad connect because I think they would enjoy each other! I love you guys and am so sorry for your loss. Much love to your family!

I am so sorry to hear of your loss. My thoughts are with you during this difficult time.

Our sincere sympathy and prayers,Lou was a fine man and may he rest in peace

My sincerest condolences to the Anthony family! I have wonderful fond memories playing golf with Lou and his buddies such good memories. A true Gentleman!

Melissa & Family, I am very saddened by the news of your loss. Whenever I saw Tony he always had a smile and good news to share. He was a dear man. I will keep you and your family in my prayers.

Mel, so sorry to hear about your dad thinking about your entire family during this tough time

So very sorry for your loss. Lou was a great man. Prayers for your family.

Marianne & Mrs Anthony: Your Dad/Husband was a wonderful man. I will say some prayers for Mr Anthony & your family.

May your memories of Louis J. Anthony, give you peace, comfort and strength…