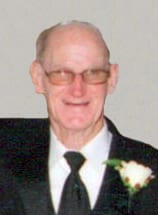 BARTSCH, Louis Joseph, 88, of Wheeling, W.Va. was welcomed to join the Lord on November 4, 2015.
He died in the home that he and his family built with their own hands.
He was born August 18, 1927, in Wheeling, a son of the late Herman and Adelaide (Duffy) Bartsch. He was a member of St. Vincent de Paul Catholic Church in Elm Grove. He worked as a carry out for 30 years at Reisbeck’s Food Mart in Elm Grove, after retiring from Columbia gas with 40 years of service. There was never a man so dedicated to loving his family. He was a lifelong member of the Wheeling Central Boosters and worked Wheeling Central football games. He was very active in the Elm Grove Civics, assisting with street fairs and fireworks. He also dedicated much of his time and effort the Ohio Valley Jaycees and enjoyed Friday Night Poker with his family.
He served 18 months in the U.S> Army Air Corps before coming home to work for Marsh Wheeling Stogies, where he met and then married the love of his life on April 21, 1951 Joan Marie Evans Bartsch  and was blessed to be married for 50 years.
In addition to his parents, he was preceded in death by his wife, Joan Marie Evans Bartsch , one daughter, baby Lisa Bartsch, one sister, Mary Ellen Macklin and her husband Robert, four brothers, Herman Bartsch and his wife Marcella, Thomas Bartsch and his wife Mary, James Bartsch and his wife Marilyn, and Leo Bartsch.
He is survived by two daughters, Becky (Rod) Hatch of Akron, Ohio, and Joni (Matt) Tarbett of Wheeling; one brother, Jerry Bartsch of Columbus, Ga.; Sisters-in-law, Janet (Buck) Vogt of Texas, Jean Morningstar of AZ, and Mary Ann Bartsch; Brothers-in-law, Mark (Janice) Evans of Mich., and Mervin (Ella Mae) Evans of Wheeling; and two grandchildren, Nathan and Nicole Baron.
Friends will be received on Friday, November 13, 2015 from 2-4 & 6-8 pm at the Altmeyer Funeral Home, Elm Grove Chapel, 154 Kruger Street, Elm Grove where a vigil service will be held at 7 pm. Mass of Christian Burial will be celebrated on Saturday, November 14, 2015 at 10 am at St. Vincent de Paul Catholic Church with Msgr. Paul A. Hudock as celebrant. Interment will follow in Halcyon Hills Memorial Gardens.
In lieu of flowers, memorial contributions can be made to Valley Hospice, 10686 State Route 150, Rayland, Ohio 43943.
Online condolences may be expressed to the family at www.altmeyer.com

Lou was a kind co-worker. He loved the little ones that came through the registers. He never overlooked a one of them as he bagged their mothers’ groceries. He was a hard worker. His shift was 7am-11am. but he was always there early (like 6-6:30) to bring in any carts left outside the night beore. Then he would straighten up the front end. I enjoyed his company. No one will ever have his work ethic.

Lou was a kind, compassionate , caring man with a wicked sense of humor !! It was a privelidge to be even a small part of his life . Heaven definately gained an angel

I was always happy that Uncle Lou was my godfather. His wicked sense of humor and views on how to live a balanced and happy life was one of our early discussions. It is advice I will always remember.

I was proud to have Uncle Lou as my confirmation sponsor. We hunted together on several occasions. He was a wonderful man, who I will miss badly. Much love to Becky and Joni Lee, and know that I will pray for you and for the repose of his soul.

Lou’s Family,
As a regular Riesbeck’s customer, it was my honor and privilege to get to know Lou over these many years. He was always so friendly, kind, and thoughtful each and every time he helped with my groceries. As he would be loading my trunk, we would talk about the weather, Central football, and just life in general. He was truly a sweet, sweet man and will be greatly missed.
Linda Melko

May your memories of Louis Joseph Bartsch, give you peace, comfort and strength…