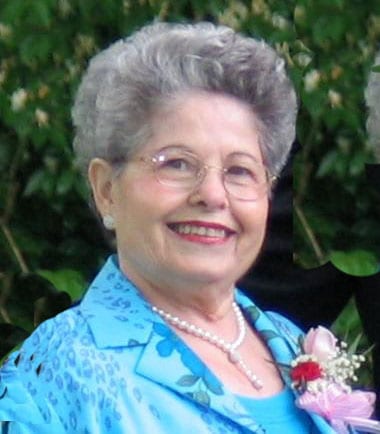 She was born, December 13, 1929, in Monteparano, Italy, a daughter of the late Mike and Katherina (Vizzaro) Rizzo. She was a member of St. Vincent de Paul Catholic Church in Wheeling, the Wheeling Elks, and the Wheeling Italian American Club.

In addition to her parents, she was preceded in death by her first husband, Henry Schramm, one daughter, Joyce Panico, one sister, Sisima Scardino, and two brothers, Sam Rizzo and Antonio Rizzo.

Friends will be received on Sunday, March 4, 2018 from 2-4 & 5-8 pm at the Altmeyer Funeral Home, Elm Grove Chapel, 154 Kruger Street, Wheeling, where a vigil service will be held at 7:30 pm. Mass of Christian Burial will be celebrated on Monday, March 5, 2018 at 11 am at St. Vincent de Paul Catholic Church with Msgr. Paul Hudock as celebrant. Entombment will follow in Mount Calvary Cemetery in Wheeling.

Danny we are so sorry abòut the passing of your Mom. Ouŕ thoughs and prayers are with you.

To Danny. Pietrina,MAria,Lisa, and Federer,and other members of the Rizzo Family
Please accept our deepest sympathy. In the passing of your Mother and sister Lucia.
She was a beautiful kind person who had a heart of gold.
She is now in Heaven with the Angels and Saints!!!!
God be with all of you !
Lois and. Angela and. Dexter

Such a beautiful lady, such a warm, caring person. No one will forget her smile, she will be deeply missed by many.

Oh my,Marty, I am so sorry to hear about your sweet Lucia”s passing. You are in my prayers . You have my deepest sympathy. Love , prayers, and prayers to all. God bless

So sorry to hear about the loss of Lucy. My deepest condolences to Danny and the family.

To my sister-in-law Lucia, Words cannot express the loss we feel…you were a beautiful person. We will miss you dearly. Much love, Rosa

To the dearest Aunt any niece could ask for, your memories will remain a bright light that will continue to shine through.

Danny and Family,
My deepest sympathy for the loss of your wonderful mother. As I never got the chance to meet her I always felt that I had. As the way you always spoke of her I felt that I did know. She’s a beautiful lady and I know how much she will be missed. I will be here for you my friend, through this difficult time….
Lots of love and prayers,
Stephanie

My sincere and deepest condolences to the family and friends of Lucia. I was blessed to have known this wonderful woman for all but four years of my life. I remember Lucia coming over to America from Italy when I was going on five years of age. She couldn’t speak English,and I couldn’t speak Italian,but we had fun trying. Her life was not an easy one as she was controlled and had to bide her time until she was able to break out on her own. She earned her stripes the hard way. And for all that this woman has been through,I say to Lucia and her family with all of my humility, “Lo vi amo sempre”. Denny Albaugh