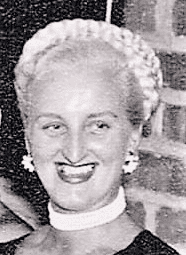 Lula Mae Sligar, 102, of Wheeling, finally made her way to heaven on Monday evening January 30, 2017 at Bishop Hodges Continous Care Center, where she had lived for the past three years.

Lu was born August 11, 1914 at her home located at 11 N. Penn Street, Wheeling Island where she resided for the next 90 years. She then reluctantly moved from her home to Brookpark Apartments, and finally into continuous care.

She was the daughter of the late William Earl & Mae (Swan) Sligar. She was predeceased by her sisters, Bertha Paxton and Genevieve Bonar and brother Earl Sligar and his wife Wanda.

She worked for many years at her only place of employment as an assistant to Dr. Kermit Rosenberg, a Chiropractor in Wheeling. She has remained close to the Rosenberg children throughout the years. After Dr. Rosenberg’s retirement, she continued to work for his successor for several years, then retired.

In her younger years, Lu enjoyed riding horses at Oglebay riding stables and traveling around the country with her good friend, Kathleen (Sierig) Muldoon. In 1941, Lu fulfilled a dream by  traveling alone via The Burlington Zepher Train to Colorado, where she spent 3 weeks at the Drousy K Dude Ranch, riding horses and enjoying her time there.

For those who knew Lu well, you were aware never to call or visit her when she was watching her college and NFL football games. In addition, when Judge Judy came on her tv at 4pm, you had better not disturb her or you would be harshly reprimanded.

Lu is survived by her brothers, David B. (Mabelle) Sligar and Cliff Sligar and his wife Sherry (who was Lu’s best friend and companion) all of Wheeling. Also survived by nieces, Jan Holden & her children, Josh Holden and Kate (Jake) Hoyt all of Columbus, OH & Debbie (Jerry) Beavers of Wheeling, her nephews Bert (Easter) Sligar, F. Cliff (Christine) Sligar, Bill (Shelley) Sligar all of Wheeling and “Nephew” Stephen Himrod of Kauai, HI. She was also survived by her nieces, Patty Rose Elerick, Joann Farkas, Mildred Burshey and nephew Charles Paxton.

The family wishes to thank the kind and caring staff of Bishop Hodges Continous Care and a special thanks to Kelli Manning, Lu’s  “Angel” caregiver and friend.

Per Lu’s wishes, she will be    cremated and buried with her mother & father. There will be no public viewing or service. A private Memorial service will be held at a later date at Altmeyer Funeral Home, Wheeling Chapel, 1400 Eoff Street, Wheeling.

On-line condolences may be sent to the family at www.altmeyerfuneralhomes.com

Memorial contributions may be made to the Wheeling Fire Department Scholarship Fund-IAFF Local 12 (Click Here) or to Valley Hospice (Click Here) at TMCFunding.com.

You have my deepest condolences. She was a wonderful woman and we will all miss her. I hope I met her in Heaven.

Please accept my condolences. My mother, Jean Kline Schupbach and Lu were gold friends for many, many years. They were Wheeling Island girls that went to Madison School and then Wheeling High School together. It was always a joy to go visit her when she lived on North Penn Street. It was usually when she was watching a football game. We always had wonderful conversations. Lu always had a good story to tell – always using her colorful language. She was always very prout of her family. Thank you for taking such good care of her over the years.

AS SOON AS I SAW THE BRAID ACROSS HER HEAD, I KNEW THAT WAS MISS LOU, FROM THE TIME I WAS A LITTLE GIRL , I WENT TO DR. KERMIT FOR ADJUSTMENTS, RIDING UP THE STAIRS IN THE CHAIR LIFT I WOULD GO TO YWCA FOR ACROBATS THEN TO DR. ROSENBERGS FOR AN ADJUSTMENT ,SO FUNNY NOW THE TWO OF THEM WERE A TEAM ,AND I WAS TREATED SO WONDERFULLY, I CLOSE MY EYES AND I CAN SMELL THE CIGAR SMELL, BUT I WILL NEVER FORGET MISS LOU AND HER PERFECTLY BRAIDED HAIR ACROSS HER HEAD , AND IT HAS BEEN MORE THAN SIXTY YEARS RIP MISS LOU