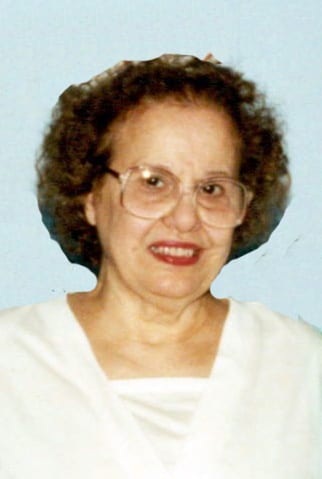 Marian Harris, 92 of Wellsburg, passed away Wednesday, February 17, 2016 peacefully at her home.  She was born April 14, 1923 in Wheeling to Maronite Christian parents who emigrated from Lebanon.  In addition to her parents, she was preceded in death by three brothers and three sisters.

Marian worked with the new Brooke County Head Start program, and as a teachers aide at Washington Grade School.  She later worked as a career sales clerk up until her retirement.  Marian also proudly served as a Republican party poll worker for Brooke County elections for many years.

She was a member of Our Lady of Lebanon Church in Wheeling, and St. John Church in Wellsburg.  Marian attended St. Alphonsus Parish School in Wheeling and had a great love and affection for the church.

Friends will be received from 9:00 am to 10:45 am Saturday, Feb. 20, 2016 at the Altmeyer Funeral Home, 1400 Eoff St., Wheeling.  Mass of Christian Burial will be celebrated Saturday at 11:00 am at Our Lady of Lebanon Church with Msgr. Bakhos Chidiac as celebrant.  Interment in Mt. Calvary Cemetery, Wheeling

So sorry to hear of your mom’s passing Veronica. God bless you and your family.