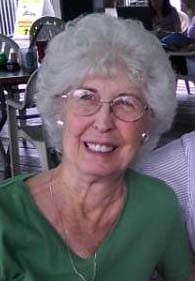 Mary Ellen McCann (Tague) peacefully left this world on Sunday, March 13, 2022. She was greeted by the love of her life, Venevin (Mac) McCann. They were married on June 13, 1953, and celebrated 66 years of happiness and love before Mac’s passing in 2019.
Mary Ellen was born in Toronto, Ohio on June 13, 1931. She was preceded in death by her parents, Thomas and Bertha Tague, and her siblings, of which she was the youngest of five: Elizabeth (Betty), John, Francis (Tuffy), and Margaret (Poudgie).
Mary Ellen and Mac were the proud parents of Faith M. Hicks (Greg) of Wheeling, WV, and Kevin E. McCann (Lee) of O’Fallon, MO. She took great pride in her children, her grandchildren, Rhonda Rawlings (Andy); Christy Galvan (Gildardo); David McCann; Joel McCann (Jennifer); Sarah Benson (Chris Hortert); and Joshua Benson (Jessica), and her great-grandchildren. She lovingly displayed pictures of her 13 great-grandchildren and often fell asleep under her picture blankets of her family memories.
Mary Ellen was a product of The Great Depression. As such, she lived a life of frugality and recycling. Paper towels were often found drying on the counter to be reused, as “they were still good”, and coupons were lovingly clipped and mailed to family members, as we might benefit from their use. She loved family gatherings and vacations, and saw them as an opportunity to feed everyone she loved, always making enough food to feed the entire town, and sometimes most of Jefferson County.
Mary Ellen met the love of her life at age 21. She and a friend attended a dance where a strapping young man introduced himself as “Pinky.” He was unsure if he wanted a girlfriend, but by the end of the evening spent together, shared his true name, Mac. The rest is history.
Mary Ellen and Mac built a beautiful life together. They opened MacMar Market in Toronto, OH, which was known for its penny candies, a lifelong obsession of hers. They happily employed family and friends in the Toronto area, and worked tirelessly to rehab one of the oldest houses in Toronto, which became known as the “Shamrock House” for its shamrock-shaped cutouts in the shutters.
She and Mac shared a love of all Pittsburgh teams, and took pleasure in knowing the rosters for the Steelers, Penguins, and Pirates better than most and in keeping scorecards for games and coaching the teams from the sidelines or the television.
She and Mac were devout Catholics and active members of St. Francis of Assisi Parish in Toronto, OH. They never missed an opportunity to practice their faith and support others. Mary Ellen never failed to help others, and most ardently refused to pass judgment on anyone, instead unceasingly finding the good in a person, regardless of who they were. She believed in love above all, and knew that the sun would shine after the rain.
Mary Ellen was a consummate optimist who found joy in all aspects of her life. She will be greatly missed by her family, friends, and those who had the privilege of knowing her. She was always kind, supportive, quick to smile, effortlessly fashionable, and the only known woman who could pull off popcorn shirts. You are our Sunshine!
Friends are invited to her Memorial Gathering Saturday, June, 11, 2022 from 10 am – 11 am at St Vincent de Paul Catholic Church , Wheeling. A Memorial Mass will follow visitation at 11 am . Interment will be held at the convenience of the family at Toronto Union Cemetery, Toronto, OH.
In lieu of flowers, the family asks that you perform an act of kindness with no strings attached, and share your sunshine with others.

oops, at 90, typing not so good.
forgive me for the error.

I remember Mary Ellen and her family so well. She and Mac were a great couple. Mary Ellen inherited her mother’s love for people. Aunt Bertha was so kind. I shall miss them both. Take care .

Dear Faith. I am very sorry to hear of your Mom’s passing. Her and your Dad were such a sweet couple.i will light a candle at st francis in her memory tomorrow. Peace and love to you, your brother and your families.

My thoughts and prayers are with you all at this time

Please know we are all thinking of you during this time of loss.

My thoughts are with you today and in the months ahead as you face each day without the physical presence of your mother. Her goodness, her love will however be present in your heart. God Bless you.

This wonderful woman is loved beyond measure. An aunt that anyone would love. May you Rest In Peace and give Uncle Babe a big hug from me. Love you❤️❤️❤️❤️❤️

I’m so sorry to hear about your mom Faith. My prayers are with you and your brother and your families. Your mom was such a nice mom! I remember her from way back when they had the candy store. She will be missed. She always had a beautiful smile. Heaven gained a beautiful angel. ❤️