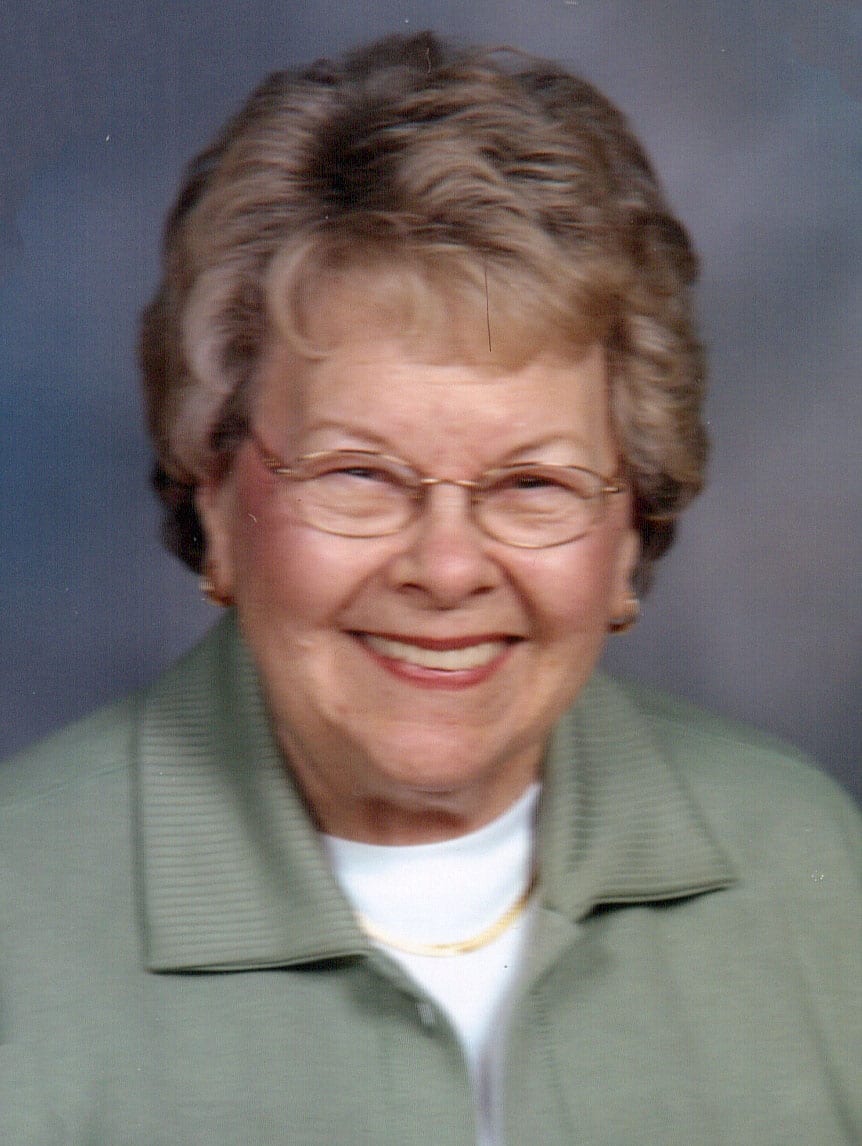 She was born November 10, 1927 in Wheeling, daughter of the late George W. “Bud” and Jean (Clyker) Schenerlein. She was a lifelong member of St. Matthew’s Episcopal Church in Wheeling. She also served on the altar guild and volunteered at the food pantry. She delivered Meals on Wheels and was a driver for Faith in Action Caregivers.

In addition to her parents, she was preceded in death by her first husband, Donald Uber, her second husband, Albert Naples, and her brother, George Schenerlein.

The family would like to extend a special thanks to the staff at Good Shepherd Nursing Home for their excellent compassion and care, especially 2 North.

Friends will be received on Saturday, February 10, 2018 from 2-6 pm at the Altmeyer Funeral Home, Elm Grove Chapel, 154 Kruger Street, Wheeling. Funeral Mass will be celebrated on Sunday, February 11, 2018 at 2 pm at St Matthew’s Episcopal Church in Wheeling with Rev. Mark Seitz as celebrant. Interment will be held Monday in Greenwood Cemetery, Wheeling.

In lieu of flowers, memorial contributions can be made to the Food Pantry at St. Matthew’s Episcopal Church, 1410 Chapline Street, Wheeling, WV 26003 or through www.TMCFunding.com

Pam, you are the only daughter I remember meeting and I wanted to offer my condolences. Your mother was a very lovely, gentle person, a great mom to all of you and a good friend to my mom and as I called them “the Golden Girls”. I would have stopped at the funeral home, but I fell on a cruise ship in the middle of night (rough seas) was out of it for 3 days bad concussion, taken to st marten, life flighted to Florida and spent week in ICU, now just trying to get strength back. My mom was so proud to have made it to 90 the only one in our family and your mom beat her 2 years, so hopefully we have a long life too. May GOD guide you through your grief.

Mary Lou you were a special lady I will always remember your beautiful smile and sweet laugh. 2 North will not be the same without you. RIP Beautiful Angel I’m truly blessed to have cared for you.

To the family of Mary Lou Naples. My family sends their deepest sympathy to you. Our thoughts and prayers goes out to you. Isaiah chapter 25 verse 8.

Nancy, My thoughts and prayers are with you and your family in the passing of your mother. May the precious memories you hold in your heart, bring peace to your soul. With my deepest sympathy.

Dear Naples family. All of you remain in our prayers and thoughts. Her love and strength lives on in each of you. She will be your angel in heaven looking lovingly after you. Lee Ann Morgan and all of the Morgans, Hilberry and Mickels.

Meg, am so sorry for the loss of your mom.I know the feeling well and remember all thegood times we had with Peg Tebay and our great staff

God bless you , Naples family . Thinking of you and holding you close in thought and prayer at this sad time. Sending our love, Cathy and Jay Nicholson

May light perpetual shine upon her.

ML will be greatly missed, that smile lit up the entire floor at GSNH! Happy and loving memories are gifts that you gave to us. Thank you, ML, for a strong, life well-lived life that we can share with others, and for the great heart that you selflessly shared to all that had the honor of knowing you. Our loss is heaven’s gain. Until we see you again, pray for us, as we will for you. You are our warrior, now and forever.