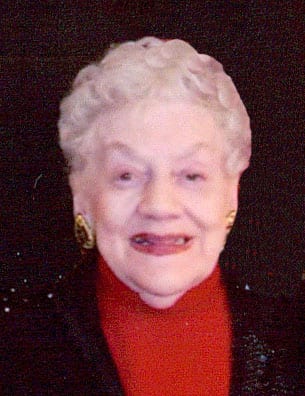 She was born June 5, 1932 in Wheeling, a daughter of the late Chester J. and Susan B. (Bushovisky) Lucci.

Mary Louise was a graduate of West Liberty State College. She taught elementary school and Spanish in Wheeling and Cleveland and she was a member of St. Stevens Catholic Church. Several years ago Mary Louise experienced a life changing understanding of volunteerism while working with Hospice. She was deeply moved as she witnessed volunteers giving time, talent, compassion, support their hearts and spirits to benefit others. She resigned from many of her social activities and joined a group of entrepreneurial women who did surveys of new products and donated a portion of the profits to needy organizations. Two of their favorites were Wounded Warriors and St. Jude. Part of Mary Louise’s job was vetting many, many requests for donations. She and her late husband were world travelers but after his death she preferred to stay near home. Oglebay Resort in Wheeling was the perfect place to renew friendships and make new acquaintances. She spent 90 days a year at the resort, enough to become known as Oglebay’s “Holiday Lady”. She could be reached at HolidayLady@roadrunner.com . Members of the staff and guests became personal friends and she often was invited to weddings, birthdays and anniversaries held at Oglebay.

Mary Louise enjoyed life to the utmost and was thankful for a wonderful husband, family and friends. She stole a phrase from Robin William’s Movie, The Dead Poets Society and Carpe Diem became her mantra. Not only did she seize the day, she squeezed the day! Mary Louise was a member Wheeling Newcomers; past president of Gamma Zeta; Food for Hunger volunteer and volunteered at several churches assisting with transportation of the handicapped to appointments, shopping and etc.

I addition to her parents, she was preceded in death by her husband, Joseph Edmund Gaspar; sister, Betty Lee Rosenberg and her husband John.

Mary Louise is survived by a sister, Sue Daugherty and husband Don of Warwood, WV; two aunts; one uncle; five nieces; five nephews; cuzins by the dozens and eight godchildren including a set of triplets.

Per Mary Louise’s request, there will be no visitation. Interment will be in Mt. Calvary Cemetery. Memorial contributions may be made to Oglebay Foundation, Wounded Warriors and St. Jude.

The Newcomer’s Club always enjoyed visiting with Louise at our meetings when she was visiting Oglebay. Her smile and friendliness always made a member at ease and she readily bonded with old and new members alike. We will miss her radiant personality. Our sincere condolences to her family.

I’m sorry to hear of Louise’s passing. Louise and Joe were friends of my parents and became my friends. They were both wonderful people. I lived in the Cleveland area at the start of my career and enjoyed many wonderful conversations over dinners with them. We had great times together on family vacations when I was a kid and a young adult. Joe loved being on the beach while Louise would go shopping. She always returned having “saved Joe a lot of money” with some great sales. In more recent years, I would catch up with Louise on those rare times that we were both in the valley, meeting at Oglebay. Louise was a wonderful, kind and caring person, and I will miss her.