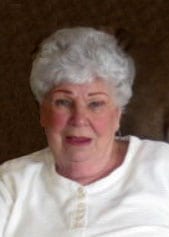 Mary, “Maxine,” Gatewood, 86 of Moundsville, WV, passed away on Friday, September 30, 2016 in Wheeling Hospital.  She was born on August 30, 1930 in Cameron, WV, daughter of the late John Peter and Mary Virginia Blake Mathias.

Maxine was a member of the Moundsville Baptist Church and retired from Ames Department Store.  She enjoyed spending time with her grandchildren and her loving dog, Chelsea.

In addition to her parents, she was preceded in death by her two brothers, Edward Mathias and Donnie Mathias, and three sisters, Nellie Cooper, Stella Schwing and Betty Zona.

Friends will be received on Monday, October 3rd, 2016, from 3-8 pm in the Altmeyer Funeral Home, Lutes & Kirby-Vance Chapel, 118 Grant St., Moundsville.  Where Funeral Services will be held on Tuesday, October 4th, 2016 at 10:30 am, with Pastor Ralph Green III officiating.  Interment will follow in Riverview Cemetery

So sorry to of Maxine’s passing. love and prayers to the whole family . It was such a pleasure to work with a wonderful lady she taught me so much. She will always have a special place on my heart. I will never forget you Mo. love Debby Anderson

Terri, So sorry about the loss of your Mom. She was a very sweet woman and I know you and your family will miss her. Our thoughts are with you.

Kenny,Vicki,Pam and Terri….we are very saddened to hear of Maxine’s passing. Please know that you are in our thoughts and prayers! Maxine was such a sweet person. I’m sure you will miss her terribly! All our love …Tom and Roberta Riggle…Kim,Cathy and Shari

My heart is broken that our neighborhood has lost our sweet, caring and loving friend. I will miss her waving at me in the mornings through her kitchen window and checking up on me all the time. I send my love to Kenny and his family, and to my nephews, Brian and Chad Crow, Aunt Renea loves you.

Uncle kenny,we are saddened for your loss. Our love and heartfelt condolences to you
Vicki, Pam, Terri and their family.