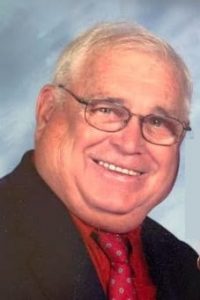 Michael Julius Christman, 84, of Wheeling, WV, passed away Monday, April 12, 2021 at Wheeling Hospital.
He was born August 9, 1936, a son of the late John and Margaret (Flatley) Christman Sr. Michael was a US Army Veteran and a member of St. Alphonsus Catholic Church. He was a member of the Cave Club, the IOLA Club, the Polish American Club and the American Legion Post #46. Michael was an avid outdoorsman and a fan of WVU and a former member of the Central Catholic High School Board.
In addition to his parents, he is preceded in death by his infant son, John Joe Christman; two brothers, James Christman and John Christman Jr.; an infant sister, Susan Christman and sister Helen Yeager.
Michael is survived by his loving wife of 62 years, Helena (Graski) Christman; two children, Beth Ann Christman-Russell and her husband Dr. Mark Russell of Ann Arbor, MI and Michael Christman and his wife Janet Christman of St. Clairsville, OH; four grandchildren, Dr. William Wakefield and Jonathan Michael Russell and Allison Marie and Ryan Michael Christman; one sister, Dorothy West of Wheeling and several nieces and nephews.
Family and friends will be received Friday, April 16, 2021 from 4-7 pm at Altmeyer Funeral Homes, 1400 Eoff St. A Mass of Christian burial will be held at St. Alphonsus Catholic Church, Saturday, April 17, at 10 am. Interment and military honors will be held at Mt. Calvary.
Memorial contributions may be made to St. Alphonsus Catholic Church by clicking here or 2111 Market St., Wheeling, WV 26003.
Condolences may be offered to the family at www.altmeyerfuneralhomes.com.

Condolences and Prayers to Beth and her entire family. I was privileged to have worked with her for a few years, and her personality was as beautiful as she was. While I never really got to meet the rest of the family, I’m quite certain Beth’s inner beautiful was a reflection of her parents and the rest of her family. I pray for the healing hand of God to help you through this difficult time.

Lena,Beth, Mike and families, so sorry to hear of Mike’s passing. We had lots of great times at St Alphonsus. He will be fondly remembered. Sending prayers and love. Debbie O’Connell Bryan and family

I am so sorry for your loss. My dad, Ryan, and I always enjoyed coming to the house for a cookout and to go swimming. Mike will be sorely missed. You have my deepest condolences.

Helena, I am sorry to learn of Mike’s passing. He was always such fun when we planned reunions of Central and SJA. He always had an opinion and a vey disarming smile. He will be missed. My sympathy.

Sorry for your loss Mike, I’ve never met your father but i know that he raised an amazing son. God Bless you and your family.

My deepest condolences to the Christman Family. My thoughts and prayers are with all of you.

Mike, Janet, Ally, Ryan & extended family,
My deepest sympathy to all of you. Keeping you in my thoughts and prayers during this difficult time.

Helena, sending my sincere condolences on the passing of your dear husband. I hold you and your family close in prayer for strength, peace and comfort for the difficult days ahead

Dear Mrs. Christman, Beth,Mike, and family, I’m so very sorry in the loss of Mr. Christman. He always had a big smile on his face! Your mom and dad were your biggest fans and you are blessed to have had such a loving father! Your mom will need your loving arms around her, her most special love is now in heaven and he’s counting on you to keep his love alive for her ! Gob Bess you all! With sincere sympathy, Susan Palmer Stanley ❤️

I’m so sorry for your loss. Your family are in my prayers.
God Bless