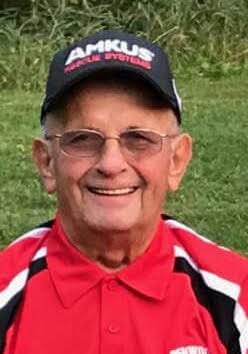 Friends will be received at Altmeyer Funeral Home, Benwood-McMechen Chapel, 214 Marshall Street, McMechen, on Wednesday from 4-8 pm and Thursday from Noon until time of Fireman’s Service at 7:30 pm.

Mass of Christian Burial will be celebrated at 10 am, Friday, June 18, 2021, at St. John Catholic Church, Benwood, with Rev. That Son Ngoc Nguyen as celebrant. Interment will follow in Greenwood Cemetery, Wheeling.

Memorial contributions can be made to the Benwood Volunteer Fire Department and/or The JaymisonStrong Fund at WesBanco Bank.

We are sure the citizens of the city of Benwood are appreciative as we are of the commitment and of the lifetime of Mikes service and dedication to the community. He will sadly missed as a kind neighbor of the Skvarka’s. Our Prayers and kind thoughts and sincere condolences for Mike and all of you his family…..Henry, Bob and Martha

I will never forget what Mike and Bonnie did for my sister Debbie! They are Benwood’s finest! With love and sympathy ❤️

God bless you in this time of sadness.

His service to the citizens of Benwood, Marshall County and the State of WV can’t begin to describe the life of service Chief Mike led. Mike was truly a man who put everyone else first. Thanks for all the lessons learned both in the fire service and in life. RIP my friend!

Our thoughts & prayers are with your family in this difficult time. RIP Mike

Truly sorry for you loss. Hold on to your memories, let them guide you during your time of sadness.

Tucker, So sorry for your loss. My thoughts and prayers go out to you and your family at this sad time.

Wonderful man that made his life’s work to serve people. Benwood won’t be the same without him. My deepest condolences to the family and all that knew him.

Sorry for your loss, Mike was the kindest man. Prayers to the family.