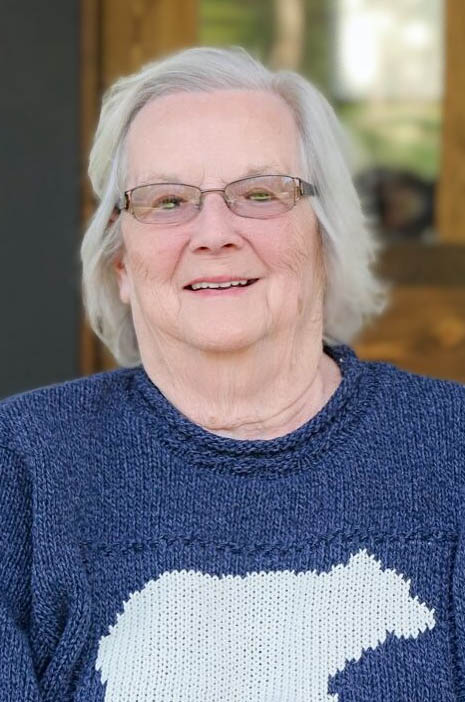 Nancy Ann Sonnefeld, 91, formerly of Wheeling, WV, passed away on Sunday, February 21, 2021 in Montana. Nancy was born in Ohio on February 1, 1930, daughter of the late Fred and Estella Butcher. She had one brother, Bob, who was killed in Okinawa at age 18. From a young age, Nancy took on the role of caregiver as her family grieved the loss of Bob.
Nancy graduated from Martin’s Ferry High School where she was football princess and class president. Throughout high school, she worked at L.S. Good Department store and discovered her love of high fashion. After high school, she worked at the Ohio Bell Telephone company, earning the title ‘sweetest voice in Ohio’. She returned to L.S. Good’s in the 1960’s as Assistant Buyer for three valley stores. In the 1980s she joined Stone and Thomas and was promoted quickly from associate, to department manager, and finally to head buyer for the French Room. She spent many days flying to New York City, attending runway shows and buying for the high-end French Room. She had a talent for fashion and knack for knowing just how to make a woman look and feel as beautiful as ever. She dressed many of the elite women of West Virginia, a career she took great pride in.
Nancy married the love of her life, Robert “Bob” Sonnefeld, in 1951. They had one daughter, Suzy, and were married for 31 years before Bob’s passing. Nancy never married again and often dreamt of dancing with her husband, which is exactly what we bet they are doing now.
Nancy was a long-time member of St. Michael’s parish and her faith was integral to her life. She volunteered at Wheeling Hospital for many years, something she found great joy in. She also enjoyed many fun times playing cards and laughing with her friends.
There is nothing quite like a grandmother’s love, and Nancy loved her grandchildren Maura, Cole, and Julia beyond any measure. Most recently, Nancy was able to meet and fall in love with her great-granddaughter, Ava, who quickly became Nancy’s little sweetheart and brought a light into the last years of Nancy’s life. Ava, wise beyond her years at 5, is a kind soul just like her Neen and we know that their meeting was impactful and their love everlasting.
Nancy remained in Wheeling until 2015 at which time she began a 6-year, memory filled, cross-country adventure with her grand-daughter, Maura. At 85, Nancy and Maura road-tripped from WV to Texas where Nancy reunited with her grandson, Cole, and met Ava. At 86, the whole family headed to Seattle, where Nancy saw the prettiest flowers she’d ever seen. Nancy’s granddaughter, Julia, joined the adventure in Seattle and they were able to spend time together making memories. Nancy spent weekends dancing and laughing with Ava, forging the sweetest bond. At 88, Nancy’s adventure took her to Montana where she lived with her granddaughter, Maura, and made some of the best memories. She saw Glacier National Park, ate loads of huckleberry ice cream, shopped the boutique stores of Whitefish, and made many more people fall in love with her.
It is hard to put a life into words, especially a life that touched and impacted so many people. Nancy was an elegant, selfless, beautiful and loving woman who always put other people first. Once asked if she could do anything in life, what would it be? Her answer was simply to have a family. She wanted nothing more than to have a family and to surround her family with love, and that is exactly what she did. The void left by her loss will never be filled, but the love she gave will live on in the hearts she touched.
She is survived by her daughter, Suzy Demas of Wheeling, WV; her granddaughter, Maura Hamilton, Whitefish, Montana; grandson Cole Demas, Bothell, WA; granddaughter Julia Demas, Wheeling, WV; great-granddaughter Ava Demas, Bothell, WA; many nieces, nephews, great-nieces and great-nephews from around the country; and countless friends she made along the way.
Mass of Christian Burial will be celebrated at 10 am, Saturday, August 7, 2021, at St. Michael Catholic Church, 1225 National Road, Wheeling, WV. Interment will follow in Mount Calvary Cemetery, Wheeling.
Arrangements by Altmeyer Funeral Homes, Wheeling, WV.

Nancy was a wonderful gracious LADY. So very giving and kind. Enjoyed times together with my mother-in-law, Nancy Jo Clarke, who passed in February 2020. Many good times together.
Maura- you both were blessed to have one another.

My Aunt Nancy and Uncle Bob were like surrogate parents to me while growing up and just being with them during summer months kept me growing in the right direction. I have such fond memories and am so very thankful they were both in my life. May light and love surround you dear Nancy…you touched so many lives in such a positive and loving way.