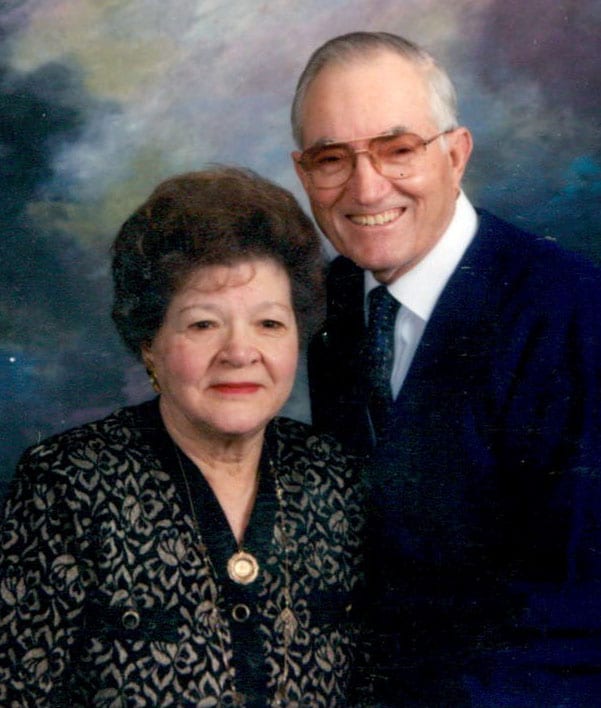 Norman Pentino died Monday, June 6, at the age of 96, on the 72nd anniversary of the D-Day invasion, a war he bravely fought in.  He passed peacefully at Wheeling Hospital’s Continuous Care Center surrounded by family and friends.

Norman was born in 1920 in Cianciana, Sicily, Italy.  He was the only son of Pasquale and Rosa Pentino and brother to Nancy Manderick (Washington, PA).  Norman moved to the United States with his family when he was just a child, in search of a better life. His family settled in the Elm Grove section of Wheeling where he later met and married the love of his life, Eleanor Bellanco Pentino.  They were married for 70 years, until her passing in 2011. He has spent the last 5 years waiting to see her again.  Together Norman and Eleanor raised 7 children; Rose Ann Nassif (George); Patty DeGasparis; Norma Studenc (Dennis); Thomas Pentino (Denise); Mary Ann Murad (Thomas); Pat Pentino (Cynthia); and he is preceded in death by a daughter Carol DeCesare.  They had 15 grandchildren, 20 great-grandchildren and 7 great-great-grandchildren.

Norman enlisted in the Army in 1943, in the 315th Troop Carrier Squadron at the start of World War II.  He was stationed in India, taking part in supply deliveries to the front line in China during the Burma Conflict.  After returning to Elm Grove he went to work at Wheeling Pittsburgh Steel Corporation where he retired in 1982 after 36 years.  Norman was an active member of Saint Vincent de Paul Parish, The Italian American Club, The Elm Grove Civics, The Elm Grove VFW and The Elm Grove Eagles.  Norman was often seen at the Eagles in the early morning having his cup of coffee or walking the neighborhood to stay in shape.

Norman was a man of few words but those words were laced with laughter.  He was a lover of old movies and Italian music.  He was a devoted husband and father.  He was the embodiment of the words “The Greatest Generation.”  He will be missed.

In Lieu of flowers memorial contributions may be made to St. Vincent Church through www.TMCfunding.com.

On line condolences may be made to the family through www.altmeyerfuneralhomes.com.

We are so sorry to hear of the passing of your father.

What a wonderful man! What a great couple! Please know your family is in our thoughts and prayers. May God bless you all and see you through your grief. Love, Bill and Cindy Orum

Patty, Norma and the entire family, prayers for your dear father and for peace for the family at this time of great loss and sorrow

DEAR FAMILY OF NORM.
WE WILL MISS HIM ON THURSDAY MORNING PLAYING “the jug “HE IS WITH YOU MOM NOW AND THAT WILL MAKE HIM HAPPY. GOD BLESS THE ENTIRE FAMILY AND IF WE CAN HELP IN ANY WAY PLEASE CALL

Patty, may God Bless and comfort you and your family during this difficult time.

Norman was such a nice man, and like they say, a man of few words, but he was so funny when he did comment on something. I will always remember sitting on his front porch with him last summer and laughing with him about some funny comment he would make. Or watching TV with him and he would break out in some italian song. He will definitely be missed but never forgotten.

Patty and Family
So sorry for the loss of your father, may God give you comfort and peace at this difficult time , your all in our thoughts and prayers.

Norma, Denny, Tricia, and Christina,
We are sending prayers and condolences to you and the entire family in this time of need. If we can be of any help please feel free to contact us any time. He has now joined your mother in Heaven to be reunited again. R.I.P. Mr. Pentino

I REMEMBER VISITING NORMAN AND NARDA WITH MY GRANDPARENTS WHEN I WAS A LITTLE KID AND REMEMBERING HOW HAPPY HE ALWAYS WAS AND HOW HE SMILED ALL OF THE TIME. I ALSO REMEMBER HOW HE ALWAYS GREW TOMATOES IN HIS BACKYARD AND TREASURED FRESH VEGGIES. THROUGHOUT THE YEARS ( I AM NOW 68 YEARS OLD) NORMAN REMAINED THE SAME HAPPY SMILING MAN WITH A GREAT SENSE OF HUMOR HE AND HIS WIFE ALWAYS RECEIVED VISITATIONS WITH AN EMBRACE , A KISS ON THE CHEEK AND GENUINE AFFECTION, NORMAN (AND NARDA) WILL ALWAYS HAVE A SPECIAL PLACE IN MY HEART WITH MANY SPECIAL MEMORIES. GOD BLESS THE GREATEST GENERATION AS THERE WILL NEVER BE ANOTHER ONE TO MEASURE UP TO THEIR STANDARDS. RIP UNCLE NORMAN.

Your family is in prayer. Our connection goes back to the late ’60s and early ’70s. Ray remembers teaching Thomas at Triadelphia High School when he was just beginning his teaching career. Eleanor worked at one of the schools where he taught. He admired her and no doubt went to her for extra treats from the kitchen. We both send our sincere sympathy.