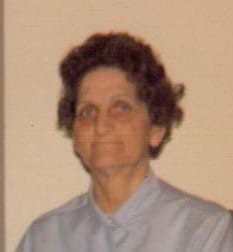 She was born March 16, 1934 in Glen Easton, WV, a daughter of the Franklin Doyle Moore and Violet Lemons Moore.

She was a retired registered nurse with Reynolds Memorial Hospital and later worked at Williamson Medical Center and NHC Nursing Home in Tennessee.  Olive was an active member with Marshall County Homemakers and a 4H Leader.  She was a member of the Church of Christ in Moundsville.

She is survived by a son, James (Karen) Himelrick, Jr. of Brentwood, TN; a daughter, Jeanne (Daniel) Melchiori of Moundsville; two brothers, Dale Moore of Alabama and Lloyd Moore of Ohio; two sisters, Mary Burkhardt of Ohio and Hazel Reynolds of Alabama; 6 grandchildren; 10 great-grandchildren; and 2 foster children, Charles Himelrick of WV and Janet White of TN.

So sorry for your loss. Your mom was a great lady and a terrific nurse I enjoyed our days of working together.

You will have a very special Angel. Prayers for you all with love and lots of hugs

You will have a very special Angel. Prayers for you all with love and lots of hugs

WITH DEEPEST SYMAPTHY TO JEEP, JEANIE, CHUCK AND JANET. OLIVE WAS A GREAT LADY,I ENJOYED TIME I GOT TO KNOW HER AND SPENT WITH THE FAMILY. I WAS ONE OF JANET BEST FRIEND AND STILL IS. LUV SHERRY (HARRIS) BROWN

Aunt Olive, you will be dearly missed. My thoughts and prayers are with you all. Sorry I cannot m as ke the services.